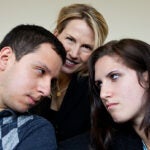 It’s all in the cortex

Amyloid-beta protein – the primary constituent of the plaques found in the brains of Alzheimer’s disease patients – may be part of the body’s first-line system to defend against infection.

In their report in the open-access journal PLoS One, a team led by Harvard Medical School (HMS) researchers at Massachusetts General Hospital (MGH) describe their evidence that amyloid-beta protein (A-beta) is an antimicrobial peptide. These small proteins are part of the innate immune system, which provides broad defense against a wide range of pathogens.

“For years we thought that A-beta was just metabolic garbage produced as a byproduct of other processes within the brain, but these data suggest it is a normal component of the brain’s innate immune system.” says HMS professor Rudolph Tanzi, PhD, director of the Genetics and Aging Unit in the MassGeneral Institute for Neurodegenerative Disease (MGH-MIND), co-senior author of the PLoS One report. “It looks like factors that trigger hyperactivity of the innate immune system – not only infection but also traumatic brain injury and stroke, which are already known to increase the risk for Alzheimer’s – could cause excessive deposition of A-beta.”

Shared by all types of plants and animals, the innate immune system is the first line of defense against invading pathogens.  The innate system can rapidly mobilize white blood cells, chemical factors called cytokines and antimicrobial peptides to kill bacteria, viruses, fungi and even tumor cells.  Antibodies and other components of adaptive immunity have limited access to the brain, but the antimicrobial peptides of the innate immune system play a key role in fighting infection within the central nervous system.

A-beta is toxic to neurons, and the protein’s accumulation as plaques in the brains of Alzheimer’s patients is thought to lead to the neurodegeneration characterizing the disorder.  The protein is generated when a larger parent molecule called the amyloid precursor protein is cleaved by enzymes.  Several different types of A-beta can be generated by the enzyme action; the more common A-beta 40 and A-beta 42 forms are particularly prone to form into toxic plaques.  Although A-beta is known  to promote inflammation, the protein’s biological activity has been considered purely incidental and only harmful.  But the current study suggests that A-beta’s newly discovered antimicrobial activity may play an important role in fighting infection in the brain.

After Robert Moir, PhD, of MGH-MIND the Genetics and Aging Research Unit, co-senior author of the PLoS One paper, noticed several physical, chemical and biological similarities between A-beta and antimicrobial peptides – particularly a human protein called LL-37 – he, Tanzi, and colleagues decided to investigate the possible connection.  Graduate student Stephanie Soscia tested synthetic versions of both A-beta 40 and A-beta 42, along with LL-37, against a panel of important pathogens and found that A-beta did inhibit the growth of eight of the 15 organisms tested.   Against seven of the affected organisms – which included the yeast Candida albicans and forms of the bacteria Listeria, Staphylococcus and Streptococcus – A-beta was as strong or stronger than LL-37.  For six of those, A-beta 42 was more potent than A-beta 40.

To see if the same antimicrobial activity would be produced by Alzheimer’s-associated A-beta, the investigators tested the ability of brain tissue from Alzheimer’s patients and from age-matched controls to suppress the growth of Candida in culture.  Reflecting the fact that amyloid plaques are primarily found in the temporal lobe of the brain, significant antimicrobial activity was observed in samples of temporal lobe tissue from Alzheimer’s patients but not from controls.  Not only did the antimicrobial strength of patient samples correlate with the amount of A-beta they contained, the activity was also suppressed by antibodies against A-beta.  Another experiment showed that Candida growth was not suppressed by tissue from the cerebellum, an area where A-beta levels are low, from either Alzheimer’s patients or controls.

The researchers suggest that chronic activation of the innate immune system in response to either a persistent or transient infection of the central nervous system might lead to excess production and accumulation of A-beta.  Known Alzheimer’s risk factors – such as stroke, head injury and exposure to certain anesthetics – could also trigger the innate immune system and increase A-beta production, leading to an excessive and dangerous inflammatory response within the brain.

“Now we need to figure out what is triggering the innate immune system, particularly as we age, and what genes control A-beta’s role in the innate response,” says Moir, who is an assistant professor of Neurology at Harvard.  “If we can identify which pathogens are more likely to trigger A-beta plaque aggregation, we might develop ways to prevent or control that response, for example by immunization.”

The work reported in the PLoS One paper was supported by grants from the Cure Alzheimer’s Fund.  “This is the kind of high-risk, high-reward project for which it’s very difficult to get federal funding,” says Tanzi, the Joseph and Rose Kennedy Professor of Neurology at HMS.  “We really appreciate their vision in funding this important work.”  In addition to lead author Soscia, co-authors of the study are Kevin Washicosky, Stephanie Tucker, and Bradley Hyman, MD, PhD, MGH-MIND; James Kirby, MD, and Scott Duong, Beth Israel Deaconess Medical Center; Martin Ingelsson, Uppsala University, Sweden; and Mark Burton and Lee Goldstein, MD, Boston University Alzheimer’s Disease Center.