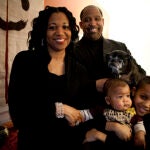 In recent weeks, Harvard’s Allston-Brighton neighbors and the Harvard community have been celebrating ice season.

More than two months of free ice-skating for all ages and skill levels began Jan. 16, with the opening of the Harvard Allston Ice Rink. Since then, neighbors and Harvard students have clocked nearly 2,000 visits to the former car dealership turned temporary indoor rink.

During the Boston Public Schools winter recess in February, the rink was open daily, offering children free skating and activities, including a lesson on how to spin. Harvard tapped its own talent in Alise Johnson, a staff member and certified U.S. Figure Skating instructor, to offer students some basic skill lessons — everything from how to stop and skate backward, to embracing their inner Olympian with a spin.

The rink’s immediate success led to extended hours. In addition to the earlier Friday through Sunday session, the rink opened Wednesday evenings to provide ice time to Allston-Brighton children in the Allston-Brighton Youth Hockey Association’s free Learn-to-Skate program and more skating for the public.

The rink also was buzzing on Feb. 26, when Harvard President Drew Faust, Boston Mayor Thomas M. Menino, and a crowd of more than 150 gathered to celebrate the awarding of another $100,000 in Harvard grants for local nonprofits.

The event celebrated the second round of Harvard Allston Partnership Fund grants, a University-city-community collaboration that has infused approximately $200,000 over the past two years into 14 organizations that serve the Allston-Brighton community. Menino and Faust took turns at the podium in front of the standing-room-only community room as die-hard local skaters took advantage of the free ice rink in the garage.

“Without the availability of these resources, these programs would not be able to fulfill their missions during these difficult economic times,” said Menino, who underscored the important work that each organization does in the Allston-Brighton community. “With Harvard’s assistance, we’re able to continue great programming that nurtures kids and keeps them busy, just like this skating rink.” In introducing Faust, Menino thanked her for being so available to Boston and Allston.

In another event, on Feb. 16, neighbors skated on the big ice at Harvard for the 21st annual Allston-Brighton Family Skate at Bright Hockey Center. Nearly 50 children, teens, and their parents attacked the ice with their polished skating skills.

For some of the rink’s nearest neighbors, Harvard ice is becoming a habit. David Vu, a 17-year-old resident of Charlesview Apartments, has been skating at the Allston rink often and came to the Bright too.

Vu strapped on skates for the first time when the Allston rink opened and now he’s got the hang of it. “On a scale of one to 10, I’ve gone from zero to seven in a month,” said Vu. Allston ice time will continue in March.

On Sunday, March 14, from 2 to 4 p.m., Allston Village Main Streets will sponsor a community event at the rink, including participation by local businesses. There will be snacks, music, and hot chocolate.

Alison Brisette contributed to this story.

Coming up: An Evening with Champions, a premier skating exhibition that raises money for The Jimmy Fund, will celebrate their 40th anniversary this spring with their annual show April 16-17. For more information, visit the event Web site.