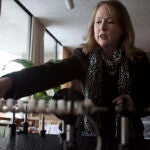 The electricity generated by fans of the Harvard men’s basketball team at Lavietes Pavilion on Friday (Feb. 19) was enough to power all of Cambridge, but not enough to help the Crimson take the energy out of first-place Cornell, who won, 79-70. Still, the next night Harvard easily imposed its will on Columbia, 77-57, to earn a weekend split.

Gunning for Cornell in a rematch of Harvard’s 86-50 loss on Jan. 30, which was its worst this season, the Crimson stood tall and strong through the game’s first eight minutes against the Big Red, clinging to a slight lead. But after tying the game at 16 apiece, Cornell went on a 10-3 run to go up seven, never to trail again.

Down by as much as 17 in the second half, Harvard went on a spirited 9-0 run to cut the lead to eight. Then, after a Cornell missed shot, Brandyn Curry ’13 drove down the court and found freshman guard Christian Webster in the left corner, who knocked down a three-pointer to bring Harvard within five points and force a Cornell timeout.

Despite chants of “I believe that we will win! I believe that we will win!” from the student section echoing through the stadium, the experienced calm of Cornell showed. Coming out of the timeout, the Big Red drained two consecutive three-pointers to extend the lead to 11, quieting the cheers of the Crimson faithful and halting Harvard’s comeback.

“I was really proud and pleased of an incredible basketball game that we had a chance to be a part of in our arena, with a great environment, with our students being phenomenal for us,” said Harvard coach Tommy Amaker. “It’s nice to have meaningful games for our program and for our kids right now. Being pretty young overall, hopefully this will pay dividends for us down the road … this season.”

“We’re obviously very thankful for the support we’ve had. I’ve never seen anything like this in my four years, and I’m pretty sure it wasn’t like this before I got here, so we’re very thankful for the student body,” said Jeremy Lin ’10, who led the Crimson in scoring with 24 points. Despite the disappointing outcome, the senior guard acknowledged that the team gave all that it had. “We don’t regret the effort we gave.”

“I told our kids it’s not like everything is over and lost. Obviously, our road is pretty tough, [but] one win wasn’t going to put us where we needed to be, and I don’t think one loss is, in terms of putting us out of it,” said Amaker.

The next night Harvard manhandled the Columbia Lions for its 18th win, behind a career-high 23 points from sophomore guard Oliver McNally, who provided a spark off the bench.

The split keeps Harvard (18-6; 7-3 Ivy League) in third place in the Ivy League. Although the loss to Cornell is deleterious to Harvard’s title hopes, the team still is just two games back.

Even if Harvard can’t win its first Ivy title this year, the season’s success will be well-documented. With two home games, against Brown (Feb. 26) and Yale (Feb. 27), remaining on the schedule, followed by games at Penn (March 5) and Princeton (March 6), Harvard is on pace for its best season in more than a half century and is two wins away from the first 20-win season in program history.