Turning to the wind 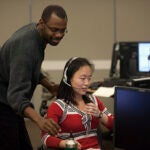 Last August about 100 residents of an island off Maine gathered at their pristine little port to watch the arrival of three giants.

From shore, the islanders could see their enormous white arms, resembling a surfaced submarine or the bony remnants of a prehistoric beast, lying on the deck of an approaching barge.

The onlookers on Vinalhaven were welcoming the massive blades of three wind turbines, part of a community-based power project guided by Harvard Business School Professor George Baker as part of an effort to slash the islanders’ high electricity costs.

“The islands pay about three times the national average for electricity, and the wind blows all the time,” said Baker, Herman C. Krannert Professor of Business Administration, who is on leave from Harvard Business School to help complete the project. “The question was, ‘Can’t we generate electricity with wind?’”

The answer has been a resounding “yes.”

For the past three years, Baker has split his time between his home in Newton, Mass., and a house on Frenchboro, a small island east of Vinalhaven, to work on the effort. He jokes that his wife would like to know exactly where he lives. He makes the four-hour trip to Maine weekly.

The HBS professor, an authority on organizational economics, enjoys a personal challenge. Fifteen years ago he designed and built his home on Frenchboro, a remote fishing outpost with a year-round population of 43. He embraced the wind-power effort after volunteering with a local electric cooperative.

Building on that experience, he has used his time away from Harvard to explore the economic and financial feasibility of wind-power generation on Maine’s islands, ultimately heading the effort to create the largest community wind-power facility on the East Coast, known as the Fox Islands Wind Project.

The complicated process included permitting, detailed environmental impact and engineering studies, and a complex financing structure for the turbines that involved federal tax credits and the creation of a limited-liability company. There were also community meetings, where Baker was frank with the facts.

“I told the residents, ‘Here’s what it would look like. Here’s how it would work. It’s absolutely not without risk, but there is real benefit,’” he said.

The islanders ultimately backed the plan, 284 to 5.

What makes the current project free from much of the “not in my back yard” squabbling that can plague wind projects is its immediate and direct benefit to the community, said Baker.

“It’s a community-owned project where the community gets all the benefit,” he said. “There is no developer that owns the turbines and takes all of the power. The power is used locally by the community.”

Now residents can harvest their own electricity with the help of Mother Nature, instead of relying on the noisy diesel generator downtown or purchasing power from a nuclear plant down the coast or the oil-fired plant on another island, in the process paying exorbitant costs to access electricity through underwater cables.

Enlisting the support of the giant General Electric Co., Baker, who is vice president of Community Wind at the Island Institute, a nonprofit based in Rockland, Maine, was able to secure three turbines, each about 400 feet tall. The turbines were installed last summer and started turning in December. They are expected to generate 11,605 megawatt hours of electricity each year and cover all of the island’s annual energy needs.

Currently at work on several other wind projects along Maine’s coast, Baker called the Vinalhaven experience “incredibly satisfying and fulfilling.” He said he hopes someday to be able to harvest the vast opportunity presented by “the much bigger and richer wind resources” available farther offshore.