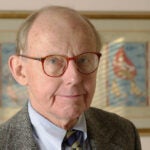 Ann Pearson is a chemical sleuth, tracking traces of ancient life and environments through the chemical fingerprints they left behind.

Pearson, a professor of biogeochemistry in the Department of Earth and Planetary Sciences, initially thought she would become a biologist before she became enamored with chemistry as an undergraduate at Oberlin College. She made the shift, but remains involved in both disciplines today, as she wields the tools of chemistry to look back at biological systems and environments from millions of years ago.

Pearson’s favored tools are isotopes, which are heavier or lighter versions of elements — such as carbon, nitrogen, and oxygen — that are important in living systems. Ordinary carbon is known as carbon-12, because it has six protons and six neutrons in its nucleus. Carbon-13, with six protons and seven neutrons, is heavier and rarer, but still common enough to be regularly detected and measured by scientists.

In her work, Pearson uses the ratio between different isotopes in lipids, proteins, and whole cells to infer things about ancient life. In a recent project conducted in collaboration with researchers at the University of Illinois, for example, she examined the carbon isotopes in ancient grass pollen to learn more about the environment in which they grew. Grasses that grow in hotter, dryer environments take up carbon isotopes in different ratios than those in cooler, moister environments, Pearson said.

Pearson’s main area of research doesn’t involve ancient grasses, however. It involves microbes living in the seabed, and it examines their chemical composition for clues about the oceanic environment in which they lived. Because the chemical elements inside those microbes come from what they consume, Pearson says her work employs an unusual strategy to understand ancient life and ecosystems.

“We use the ‘you are what you eat’ philosophy for microbes,” Pearson said. “In the end, what that does is provide windows into the past climate — not temperature directly, but more like reconstructing ecosystems that lived in warm or nutrient-rich environments versus ecosystems in very cool and low biological productivity situations. I suppose you could say we try to understand the microbial contributions to modern and ancient ecosystems.”

One such project probes the Mediterranean Sea over the last 150,000 years. At various times, Pearson said, the Mediterranean has been dominated by large freshwater inflows from the Nile River at one end or large saltwater inflows from the Atlantic Ocean at the other. Pearson and graduate student Meytal Higgins examined the interplay between these two flows and how they affected life in the sea by studying the isotopes nitrogen-14 and nitrogen-15.

Pearson learned much about biology early and firsthand, on her family’s farm on the San Juan Islands of northwest Washington state. Every evening she milked the goats and collected eggs from the chickens. The daughter of the town accountant and the middle school science teacher, Pearson tore through the tiny island high school’s curriculum, leaving a year early at age 16 because she’d already taken all of the courses in core subjects that the school offered.

So, with the blessing of her parents, Pearson started her freshman year at Oberlin. She had intended to major in biology, but she liked her freshman chemistry class so much, she moved into that field.

“I liked chemistry because it was very well-defined in terms of being quantitative and having clear-cut problems with definite solutions,” Pearson said. “I found it to be rewarding rather than challenging.”

After graduating with a chemistry degree in 1992, Pearson joined the Peace Corps, drawing on her family farm experience to work as an agricultural volunteer with sheep ranchers high in Ecuador’s mountains. She recalled applying for graduate school from her chilly house two miles above sea level.

On her return, she entered the oceanography program run by the Massachusetts Institute of Technology and the Woods Hole Oceanographic Institution. After a brief postdoctoral fellowship at Woods Hole, Pearson came to Harvard as an assistant professor in 2001.

Pearson is the 2009–10 Radcliffe Alumnae Fellow at the Radcliffe Institute for Advanced Study. Her project is titled “Investigating the Deep Biosphere.”