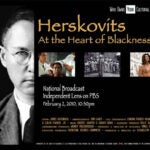 ‘Herskovits at the Heart of Blackness’

An artist at Radcliffe fills out photography’s flatness

New York City artist Leslie Hewitt, a Radcliffe Fellow this year, first trained as a sculptor. But she has since brought the heft and dimensionality of that medium to photography.

Hewitt’s stark, evocative photographs — composed like still lifes — have been called “photosculptural.” For one thing, some of her pieces match the scale of a public sculpture. They measure 5 feet by 7 feet. Instead of being hung, they are displayed leaning heavily against gallery walls. Other pieces are smaller-scale photographs, composed in layers that evoke the physicality of the pictured objects.

“Riffs on Real Time,” for example, is a 10-photo series that saw two earlier iterations, starting in 2002. It is on display at Byerly Hall through Feb. 25. They are modest in size and wall-mounted, yet still suggest the weightiness of sculpture.

In a lecture at the Radcliffe Gymnasium Jan. 27, Hewitt talked about breaking photography’s liminal conventions, which is a way to take the art’s framed flatness and fill it out with a kind of illusory heft.

On display, she said, her work emphasizes “both the visual and the physical experience” of photography, capturing both “the illusion of photography and the undeniable physical presence of objects.”

Within her photos are collagelike collections of what she called “the residue of mass culture,” including old books, forgotten films, amateur snapshots, tearsheets from newspapers and magazines. “I have the impulse to archive,” said Hewitt, who is captivated by history and its resonant artifacts.

She is also taken by the power of everyday objects that, when arranged in startling ways, acquire transformative power.

Hewitt, the child of parents involved in the civil rights struggles of the 1960s, is also the grandchild of people caught up in the great migration of blacks northward in the 1930s. She described growing up in a house full of books meant to change the world. Her work carries the sense that artifacts from the past have the power to ignite present-day political insights.

Two 1968 books on racial justice appear as props in “Make It Plain,” a series of five large-scale photographs included in Hewitt’s lecture and slideshow. Three were shown at the 2008 Whitney Biennial and are still the objects of conversation, said Lucien Terras, who  co-directs the D’Amelio Terras Gallery in Manhattan’s Chelsea district, which displays the young Hewitt’s work.

Hewitt is a self-confessed stickler for how her photographs are grouped in a show, but she admits they have a life apart from one another afterward.

“I have one on my living room wall,” said Terras, “and I enjoy it on its own.”

Along with her archival urge, Hewitt uses the assemblages within her photographs to grapple with what she called “the slippery process of memory,” a quality of mind she described as sometimes blurring the boundary between individual and collective recollections.

The composite nature of each piece is also meant to “slow down the process of looking,” said Hewitt.

To gain insight into the interchange between art and art watcher, she used part of her first semester at Radcliffe to study perspective, the history of optics, and the language of early photography. (Helping her was research assistant Amy Yoshitsu ’10, a concentrator in visual and environmental studies.)

Slowing down the viewing process is possible in “Riffs on Real Time,” in part because of the layered nature of the photographs.

At the center of many artworks is a small snapshot, a “vernacular” form of the photographic medium that Hewitt said captures the resonance that memories can have. One is a faded color snapshot from the 1964 World’s Fair. Another shows a black man in shorts standing by a barbeque grill.

Then comes a second layer in the pieces, one meant to “open the aperture of vision,” said Hewitt. They include scrawls from a notebook, inked doodles, old magazine text, and similar elements. “Mementos and personal documents” like these, she said, help to draw out “an intimate engagement with the viewer.”

That intimate engagement is important to Hewitt, who compared the photograph to a window. Her layered pictures take the framing aspect of a photo, she said, and repeat it like “a series of windows in succession.”

In “Riffs on Real Time,” the last and outer layer of the pictures is the floor of her studio, where the photo assemblages are composed. This creates an outer frame of worn and scarred wood, shiny with shellac. The flooring is weighty and physical, and adds to the sculptural quality of the photographs.

In her large-scale floor pieces like “Make It Plain,” Hewitt refuses to use glass, considering it a barrier in the engagement between viewer and artwork. The photographs are mounted on aluminum, as they lean unsecured within the custom wooden frames.

The constructed arrangements of these big pieces “operate like words in a sentence,” said Hewitt, in a juxtaposition of the mundane (such as the snapshots) and the politically resonant (such as books from the 1960s). The point is to wrestle “new meaning out of everyday materials,” she said.

Sometimes those everyday materials are windows onto the way that we use things. During a fellowship in the Netherlands, Hewitt studied 17th century Dutch masters and the objects they gathered for their still lifes.

There were evocations of death and the temporality of life, she said, repeating what critics often say. But the still lifes also showed consumption patterns as well as an early celebration of capitalism, including the dark side of trade. She showed a 1670 still life by Juriaen van Streeck that displays, among other “goods,” a Moorish slave.

A similar engagement with objects marks our present age of global capitalism, said Hewitt, who is trying to revive the idea of what she called “pictorial sculptures.” Along the way, she acknowledged a paradox in “the inability of photographs to show materiality.”

Hewitt called each of her composite photographs, “a quiet history of sorts,” and an attempt not only to create a new “language” for photography but the possibility that pictures might be a way “for engaging [with] radical historical material.”

Beyond history and artifacts and the impulse to archive, of course, Hewitt said the uncanny mystery of art remains, even to the artist. “There is this desire for more,” she said, “beyond what we already know.”