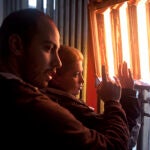 The future is now

Harvard hosts 'Fire on the Mountain: A Bluegrass Symposium'

Look for a fire shortly in the Thompson Room at Harvard’s Barker Center: a collection of musicians and scholars burning to play bluegrass. Or at least to talk about it.

“Fire on the Mountain: A Bluegrass Symposium” on Saturday (Feb. 6) will feature discussions with historians, ethnomusicologists, and musicians on the history and importance of the bluegrass form, as well as live performances.

The daylong program, which engages scholars University-wide, is sponsored by the Committee on Degrees in Folklore & Mythology, the Office for the Arts at Harvard (OfA), the Office of the Provost, Harvard’s Department of Music, the Humanities Center at Harvard, the Undergraduate Council, and the Harvard College American Music Association (HCAMA).

Pickin’ and playin’ will be banjo player Alison Brown ’84 (who has won a Grammy); Sam Bush, a mandolin player and the creator of “Newgrass,” a modern form of bluegrass; and fiddler Bobby Hicks. The scholars are from the United States and Canada.

“It’s very important that the theory of any artistic form never be too distant from the practice of it,” said Deborah Foster, senior lecturer in folklore and mythology. She developed the first such symposium in 2004, on the practice and scholarship of dance. The success of that inaugural conference inspired organizers to make it a yearly event, one that focuses on artistic and academic collaboration.

“One of the most exciting dimensions to this project has been the collaboration between the Department of Folklore and Mythology, the Harvard College American Music Association, and the Office for the Arts,” said OfA director Jack Megan. “From the beginning, this has been a shared enterprise, with faculty, students, and administrators working closely together. The result is a daylong bluegrass celebration that is more varied and rich than it ever would have been had any one of us gone it alone. It makes me realize yet again how lucky we are to be working in an environment in which collaboration — the pooling of many types of expertise and creative energy — is so valued.”

Forrest O’Connor ’10, a socio-musicology concentrator and son of a Nashville fiddle player, is behind the bluegrass theme. He helped to secure the participation of some of the country’s top bluegrass talent for the conference.

O’Connor, a mandolin player, founded HCAMA in his freshman year (with banjo player Clay Miller ’10) to draw attention to a style of music that he felt was underserved on campus.

Bluegrass traces its roots to the traditional music of immigrants from Scotland, Ireland, and England. Making its first appearance in the United States in the 1940s, the bluegrass sound — heavily influenced by Appalachian folk styles and the blues — fuses jazz, country, and ragtime. It incorporates vocals with mainly acoustic instruments such as guitar, mandolin, banjo, and bass.  Many consider “Blue Grass Boys” leader Bill Monroe (1911-1996) the father of the form.

Because of its mass commercialization, scholars didn’t always take the form seriously, said O’Connor, noting that some conservative folklorists called it “fakelore.”

To his delight, the music will be center stage Saturday with a full program of events, beginning at 10:30 a.m. and ending at 8:30 p.m.

“We are really fortunate to have not only some of the star bluegrass scholars but also star musicians,” said O’Connor. “I think it’s an all-star collaboration.”