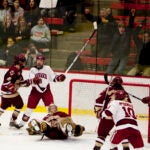 After battling back from three injuries in three years, senior Pat Magnarelli is here to stay

For senior Pat Magnarelli, there’s no sense of thinking about what could have been.

Two years ago, the Harvard men’s basketball team’s talented big man took the court in Harvard’s Ivy League opener against Dartmouth, dominant and on top of the world.

First on the team in rebounding and second in scoring, Magnarelli was coming off the best game of his collegiate career — a 22-point, 12-rebound effort in an impressive win over Colgate.

At the time he was averaging 10.8 points and 6.3 rebounds a game, ranking second and first on the team, respectively.

“Well I hope I’m not peaking right now because I don’t want to stop playing like this,” Magnarelli told The Harvard Crimson after the win. “I’m getting more comfortable.”

Extolling his sophomore forward, head coach Tommy Amaker (in his first year at the time) says, “He’s been really solid for us. … I think he’s been consistent, we can rely on him, and he’s been dependable. I’m really proud of his play, his effort, and his leadership on the court.”

Already a long, difficult journey for the Duxbury, Mass. native, Magnarelli hoped the 2007-08 season would be a redemption season after a stress-fractured vertebrae confined him to a back brace for most of his freshman season. In Magnarelli’s first season, he only played nine games.

In 2007, after just 17 starts, it was already beginning to look like his sophomore season would be his season.

In the opening minutes of Harvard’s matchup at Dartmouth, Magnarelli went down with a knee injury.

He spent the rest of the season in street clothes.

“It was really tough. My teammates were very supportive of me and they helped me though that time because they knew I was really down,” says Magnarelli.

The midseason injury was a crippling blow for Harvard, who lost all but two of their remaining games, finishing the season 8-22 (3-11 Ivy League) and tied for last-place in the conference.

After a tough rehab in the offseason, Magnarelli was ready for his second comeback, but two days before the Crimson’s first game he reinjured his knee, and two surgeries sidelined him for the entire 2008-09 season.

“It’s definitely been a tough experience,” says Magnarelli. “Coming in sophomore year looking to play, playing pretty well, and then getting injured and sitting out all junior year — it’s really tough having to sit at the end of the bench and watch your team and realize there’s nothing you can do about it. It’s a little cliché, but it’s definitely making me stronger.”

Although no one would have blamed him for putting away his jersey, he wasn’t ready just yet.

Suiting up on Nov. 13, 2009 — his first game in nearly two years — Magnarelli put together a solid effort, leading the Crimson in rebounding in the return.

With the Crimson off to its best start in a quarter century, a lot of well deserved attention has been given to fellow senior Jeremy Lin, who’s a lock for first-team All-Ivy League and is in a neck and neck race for Ivy Player of the Year. But with any team, Harvard not an exception, the Crimson’s success is as much predicated on the contributions of its role players, as it is the starters.

And the leadership Magnarelli has to offer to teammates, in addition to the screens and hustle plays won’t show up in the box score, mean just as much to the team as the statline does.

“You have hidden leaders and hidden players within your team that are worth their weight in gold,” says Amaker, “Pat is that for us in a lot of different ways. I refer to him as a stabilizer for us when he’s out on the floor.”

Amaker adds, “He has a great understanding and basketball IQ and it’s really been a neat thing for us because we have a lot of young kids. … I think the world of Pat because of all that he brings. His value to our team is great. There’s no question about it.”

“I watch Pat a lot,” says sophomore Keith Wright. “He’s a tremendous guy. Unfortunately his knees didn’t allow him to play his full college career, but it’s his senior year, he’s playing a lot this year, and really able to step up for us.”

Although he has yet to complete an entire season in his college career, Magnarelli has helped the Crimson to their first winning season in nine seasons. Looking for their first Ivy Championship ever, it would mean Harvard would reach the NCAA tournament for the first time since 1943.

“You only get four years here, and when you miss two of them, the time goes by a lot quicker,” says Magnarelli. “Talking to some of these freshman and sophomores, they’re young and they don’t know how fast it goes yet. As a senior, I try to tell them to just enjoy every moment here because it goes by quick.”

Although Magnarelli’s career surely hasn’t gone the way he would have liked, it is because of his indomitable spirit and perseverance, which has allowed him to help the Crimson to a 12-3 record.

“It means the world to have him with us,” says sophomore Oliver McNally, “But just to see him every day, working hard and see he’s having some success, it’s really motivational for the team.”

And as the psychology major enters his last semester at Harvard, undecided about his future, one thing is certain — the big man is back.