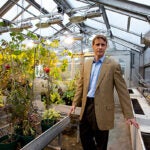 Time to change the menu

Natural gas discoveries over the past five years have raised the projections for gas as a major energy source and led to a dramatic expansion in domestic supplies comparable to Saudi Arabia’s oil reserves, a leading industry official said Wednesday (Feb. 24).

Aubrey McClendon, chief executive officer and chairman of the board of Chesapeake Energy, the nation’s second-largest natural gas producer, said that new supplies coupled with existing infrastructure improvements make the gas industry ready for a larger role in the nation’s energy picture. McClendon touted natural gas as cleaner than either oil or coal, since it emits fewer pollutants and lower levels of carbon dioxide, the greenhouse gas largely responsible for human-induced climate change.

McClendon spoke at the Science Center as part of the Harvard University Center for the Environment’s (HUCE) “Future of Energy” lecture series, which has brought an array of voices to Harvard to address energy concerns, from government officials to oil industry executives to clean-energy advocates.

McClendon, who was introduced by HUCE Director Daniel Schrag, Hooper Professor of Geology and professor of environmental science and engineering, said natural gas has long been considered a good fuel, but has not been thought of as abundant. In recent years, the use of a technique called “hydraulic fracturing” in unconventional yet abundant shale rock has opened new sources for extraction.

“Hydraulic fracturing” is a process in which a mixture of water, sand, and chemicals is injected into a bore hole drilled into shale beds deep underground. The mixture increases the pressure in the rock around the hole until it fractures, releasing natural gas bound up in the rock for extraction.

Such extraction techniques are not without controversy, however. Several protesters decrying hydraulic fracturing in Pennsylvania attended the event, saying the technique is responsible for polluting drinking water and marring the rural countryside with wellheads.

In a sometimes contentious question-and-answer session, McClendon defended the process, saying that although he couldn’t speak to every company’s industrial practices, Chesapeake Energy has employed hydraulic fracturing more than 25,000 times since the company started in 1989, including 1,000 wells drilled inside Fort Worth’s city limits, with no ill effects on groundwater. Further, he said, natural gas extraction is so common — more than a million Americans have signed leases with gas companies — that it is unlikely that widespread problems would be hidden.

He acknowledged that the wells themselves affect local areas, but said officials are working to reduce that impact, cutting the land needed per well from five acres five years ago to three acres now. He said there are always choices to be made in picking energy sources, and natural gas’ footprint compares favorably with that of the pit mines and mountaintop-removal techniques used in coal extraction.

Natural gas’ new abundance, McClendon said, can change the U.S. energy outlook. In addition to being cleaner than either coal or oil, the gas is cheaper than oil, and its new abundance is likely to push prices down further. An expansion of the industry can provide both economic and security benefits for the nation, he said, by generating jobs and replacing imported oil.

“We believe natural gas is a game-changer,” McClendon said.