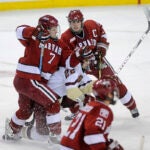 Crimson unable to fight off Huskies

Harvard women’s hockey coach Katie Stone only granted her players a couple hours to celebrate their 1-0 Beanpot championship win over No. 7 Northeastern, but the No. 6-ranked Crimson earned every precious minute of that bliss.

“They have until midnight to enjoy the Beanpot,” said Stone. “That’s what we talk about. Whether we’ve won or we haven’t won, think about it, wake up tomorrow morning, and it’s on to the next thing.”

The game’s lone goal came from a shot by Harvard forward Liza Ryabkina ’11, the tournament’s unanimous most valuable player, who scored a career-high four goals in the Crimson’s 5-0 opening round win over Boston College on Feb. 2. She finished with a tournament-best five goals.

“It’s pretty amazing. There’s really no other word for it,” said Ryabkina. “We wanted to win this Beanpot, and I think everyone played really well and really hard.”

Claiming its 13th Beanpot overall, and second in the past three years, the team won a game eerily reminiscent of last year’s final, when Boston College needed just one goal to claim the title over the Crimson. That was the first 1-0 Beanpot final ever. This was the second.

“We’re certainly happy to bring the Beanpot back to Cambridge and Harvard. It was an excellent hockey game, back and forth,” said Stone. “Those are the kinds of games championships should be like.”

Harvard goaltender Laura Bellamy ’13, who stopped all 27 shots by the Huskies, finished the tournament with 42 saves and two shutouts. She was honored with the Bertagna Award as the tournament’s top goaltender.

“The team’s played so well offensively, it’s made my job easy to try to keep the puck out of the net,” said Bellamy, who, in her eight starts since senior netminder Christina Kessler went down with a season-ending injury, has recorded three shutouts.

Bellamy only saw 11 shots through the first two periods. But when Northeastern picked up the pace in the final one, the freshman goaltender was ready, stopping 16 shots.

“I just had to keep telling myself to stay locked in,” said Bellamy, because “you never know what can happen.”

“Just like any team that’s coming from behind in a championship, they’re going to take some risks, they’re going to get a little desperate, so we are going to need to manage that kind of pressure, and I thought we did a nice job with it,” said Stone.

Although the Crimson met the challenge of defeating a top-10 team in a midseason championship, more hurdles lie ahead for Harvard, which after a short rest will have two games on the road against Rensselaer (Feb. 12) and Union (Feb. 13), before closing the season at second-place Clarkson (Feb. 19) and fourth-place St. Lawrence (Feb. 20).

Despite the need for short-term memory in college hockey, Ryabkina couldn’t help but plead with her coach to extend the celebration, asking, “Could we have until 12:15 tonight?”