Hey squash, time for your close-up 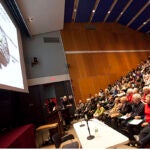 Memories are made of this

Humans likely “auditioned” plants and animals that they eventually domesticated by first managing wild populations during a long transition period — sometimes thousands of years — that led from hunting-gathering to farming lifestyles, a speaker at the Harvard Museum of Natural History (HMNH) said Thursday (Feb. 18).

Scientists believe there were roughly a dozen places where agriculture arose independently through the domestication of plants and animals. Some species — such as cattle and pigs — were domesticated independently from wild stock in more than one place at different times, he said.

Smith spoke at the Harvard Museum of Natural History as part of its “Food for Thought” lecture series, which examines the past, present, and future of our food supply and runs into this spring. Elisabeth Werby, the HMNH executive director, introduced Smith, while Noel Michele Holbrook, Bullard Professor of Forestry, moderated the event, fielding audience queries during a question-and-answer session.

Agriculture is a relatively recent development in human history, with the earliest traces found about 10,000 years ago. Despite that late arrival, agriculture has had a dramatic impact on human society, supporting larger, stable populations and the development of urban centers.

There’s a large gray area between “wild” and “domesticated” plants and animals, Smith said. Humans likely managed wild populations of everything from nuts to berries to clams by manipulating the wild environment to foster the success of food sources important to them without actually domesticating them. He cited cases of burning forest canopy trees to foster growth of sun-loving food plants below and building rock walls at the low-tide mark to foster sand accumulation and improve the environment for clams.

Species that were successfully domesticated had key characteristics, he said. Plants tended to be early-succession species that did well in disturbed environments that humans could create for them. The animals tended to be naturals for domestication — less skittish and easily led. Dogs and cats are an exception to that rule, Smith said, since they took a “let’s make a deal” approach of mutual benefit.

Even after the first plants were domesticated — illustrated in the archaeological record by larger seed sizes when compared to wild progenitor species — true agricultural societies took time to develop. Smith defined agricultural societies as those that got 60 percent of their food from domesticated plants and animals. Reaching that level, he said, took thousands of years. While the first evidence of squash domestication in Mesoamerica came 10,000 years ago, the first remains of an agricultural village only dates to 4,000 years back, indicating a 6,000-year transition period to agricultural living. While Smith acknowledged that future archaeological finds may shift those dates, he said that, even if they do shift, it seems likely there was a long transition between the first plant domestication and the development of settled villages dependent on farming as a lifestyle.

Most research on the roots of agriculture is focused on the initial transition where the first plants were domesticated, Smith said, leaving ample room for future researchers to investigate the long transition afterward.

The next lecture in the “Food for Thought” series is “From Cooking Food to Cooking the Planet:  Growing Constraints to Food Production,” 6 p.m., Tuesday (Feb. 23).