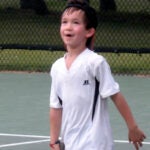 The Tennis Academy at Harvard provides tennis instruction for all ages

Six individuals have been selected for resident fellowships at the Harvard Kennedy School’s Institute of Politics (IOP). The announcement was made Jan. 11.

Former Haitian Prime Minister Michele Pierre-Louis, selected as a spring 2010 IOP Fellow and previously scheduled to join the institute this week, will not begin the semester at the IOP as she remains in her home country working to help the Haitian people in the wake of January’s earthquake. The IOP is hopeful Pierre-Louis will be able to join the institute for a limited time later this semester.

“This fellows class represents every kind of public service at every level in our world today,” said IOP Director Bill Purcell. “Our students are committed to exploring paths to public service, and our spring resident fellows will be important guides.”

Over the course of the spring semester, resident fellows will interact with students, participate in the intellectual life of the Harvard community, and lead weekly study groups on a range of topics.