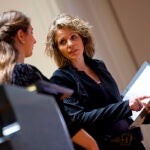 Life, with its endless barrage of conflicts, may have just gotten a bit easier thanks to Robert Mnookin.

Mnookin, the Samuel Williston Professor of Law at Harvard Law School and chair of its Program on Negotiation (PON), has authored “Bargaining with the Devil: When to Negotiate, When to Fight,” a book that analyzes some of history’s most tumultuous conflicts while offering invaluable guidance on everything from business disputes to messy divorces.

Focusing on unfair, even evil, actions — such as blackmail, labor disputes, extortion, theft — and the adversaries behind them, Mnookin dissects the trappings that interfere with rational thinking and reveals pragmatic approaches to elicit resolution and results.

“Should you bargain with the devil?” Mnookin wondered. “My question, and this book, have their roots in Sept. 11.” A month after the attacks, the PON sponsored a debate about whether President George W. Bush should negotiate with the Taliban.

“This debate led me to begin thinking about a more general question: In any particular conflict, how should you decide whether or not it makes sense to negotiate?”

Mnookin examines the historical and political perils of the Holocaust and South African apartheid to illustrate the reasons why Britain’s Winston Churchill chose not to negotiate with Germany, while South Africa’s Nelson Mandela opted to bargain with a white government that had imposed horrific restrictions. According to Mnookin, both were groundbreaking tactical judgments, and are relevant to today’s fraught global arena.

But everyday conflicts are featured, too. In 10 digestible chapters, Mnookin offers real-life scenarios that feature, for example, family members at odds with each other over an inherited vacation home.

“Before you resort to coercive measures — such as warfare or litigation — you should try to resolve the problem,” said Mnookin. “To negotiate doesn’t mean you must give up all that is important to you. It only requires that you be willing to sit down with your adversary and see whether you can make a deal that serves your interests better than your best alternative does. You can’t hope to make peace with your enemies unless you are willing to negotiate.”