Contrasts between past and present 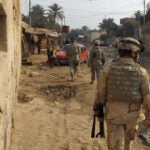 Over there, over here

Harvard veterans talk about combat in Iraq and Afghanistan, and life at the University

Cambridge is half a world away from Iraq and Afghanistan for most Americans, but not for U.S. veterans of those long-running wars. As many as 150 veterans are now students at Harvard, where they have adjusted from combat zones to tidy classrooms, as they study business, government, and law. In a series of interviews, two dozen vets discussed the startling contrasts between past and present. A few shared perspectives from overseas.

Out of high school, his first service was with the U.S. Marine Corps Band as a trumpet player. Later, as an Army officer, he was an embedded adviser to the Iraqi army and border patrol.

“The military opens doors so long as you accept the responsibilities that lie on the other side.”

After the rigors of training in Korea (“there are no distractions in Korea”), the Long Island native spent time as a platoon leader — “the plum job, in charge of 40 guys with rifles” — and then post-9/11 on the periphery of Afghanistan, where “I wanted to do more.” He spent three tours in Iraq as a Special Forces officer, conducting raids, collecting and analyzing intelligence, advising Iraqi counterterrorism forces, and managing logistics and convoys. The experience gave him pragmatism, a sense that intelligence is diverse, and insight into national security law. “Experience,” he said, “has some virtue.” After graduation, he will clerk for a year in the D.C. Circuit Court and then with Supreme Court Chief Justice John G. Roberts.

Of combat veterans at Harvard, said Scotten: “We’re happy to be here.”

A senior at West Point when his brother James Quinn was killed in the 9/11 attacks on Manhattan. Helped start the Sons of Iraq program, an expansion of the “Sunni Awakening” that reduced violence throughout Iraq.

About a year and a half after graduating from West Point in 2003, he was a rifle platoon leader in Afghanistan. Redeployed to Iraq in July 2006, he was a logistics officer stationed near the Syrian border.

Of youth and warfare, said Saunders: “Going to Afghanistan was my first real job.”

He is still in the military with a National Guard unit in Massachusetts and is chairman of VetsforFreedom.org and a frequent television commentator. Served with the 101st Airborne in Iraq and did liaison work with local governments.

“Vets come into the classroom with their eyes wide open. Vets also say: I’ve seen the best and the worst.”

After high school in Mooresville, N.C., and one desultory year in college, he worked as a ranch hand in Montana and Wyoming before taking a factory job. After the 9/11 attacks, he joined the Air Force, trained as a loadmaster on a C-17, and by February 2003 was flying missions into Afghanistan. While deployed to Iraq, he flew 300 combat sorties before returning to college and, in the summer of 2008, serving as a White House intern.

Still on active duty. His first duty station was as a tank platoon commander in Korea, where he spent two and a half years. During the second of his three Iraq tours he was a cavalry troop commander and led tactical raids.

Of vets in the classroom: “It’s a great thing for Harvard. One, you have perspective from a proven patriot. It’s very difficult to question someone’s motives or patriotism, having risked a certain level. It’s great for the vets too.”

Deciding to join the Marines long before the 9/11 attacks, he gave the English Oration at his 2001 Harvard Commencement on the need for national service, and went on to serve four tours in Iraq. He was a rifle platoon commander at the beginning of the war, helped to establish free-speech media outlets in Iraq (including a twice-weekly television show with his translator called “Moulton and Mohammed”), served in a Marine unit that saw intense combat with Shiite insurgents in Najaf, and twice served on Team Phoenix, a small-scale group organized by Gen. David Petraeus to study and counter renegade militias.

“One thing I certainly try to do in class is bring a little dose of reality to the discussion about what these wars mean in terms of the actual people on the ground. It’s so easy at a place like Harvard to discuss the grand strategies and the budgets and the politics — and forget that out in Afghanistan today there’s an 18-year-old kid fighting for his life.”

He is a West Point graduate now serving an 18-month stint with the National Guard in Massachusetts. During the first of two Iraq tours, he was an infantry platoon leader starting a week after the fall of Baghdad — and “I still trust my experiences more than what I see in the news.”

At Harvard, where there are so few veterans, other students meeting them “really want to know and learn, and ask.”

He was inspired to join the military by a high school teacher who was deployed in the first Gulf War. After 18 months in Korea as an infantry officer he did two tours in Iraq as a Green Beret — and today “it’s sometimes hard to be on the sidelines.”

One impression from the Nov. 11, 2009 ceremony for Medal of Honor winners at the Memorial Church: “Harvard has a tremendous history of service to the country.”

Still on active duty, he said his next posting will be to teach at West Point. During 19 months in Iraq, he worked in an infantry unit trying to reduce sectarian violence — “cleansing” operations by Shiite factions against their Sunni neighbors. Abandoned Sunni houses were stripped of anything valuable, he said, and often only family photos were left. “You would see a family photo. You’d see father, mother, daughter, son, baby. You’d go in the front yard and start digging, and you’d find them a mass grave: father, mother, daughter, son, baby.”

At Harvard, “We bring a current, realistic perspective on ongoing conflicts and the capabilities and limitations of Western powers to intervene in those conflicts.” It’s “where strategies meet resources.”

In April 2004, he was in Baghdad’s Sadr City, which was ground zero for the Shiite insurgency, when he was caught in an ambush. Cannon was wounded in one calf. “If there’s a good place to get shot, I got shot in that place.” His second combat tour was with a civil affairs team on a PRT (provincial reconstruction team) in Ghazni Province, Afghanistan, a unit that was “the eyes and ears of our commander.” He turned 26 in Iraq and 30 in Afghanistan.

As for what’s next: “I still want to serve, just not necessarily at the tip of the spear of our foreign policy.”

He is still in the Reserves, where he has served in a drill sergeants’ training company and as an assistant professor of military science at the Massachusetts Institute of Technology. During his second tour in Iraq, his convoy vehicle was hit 23 times by IEDs (improvised explosive devices).

Of the hard work in school, he said, “It’s a great problem to have.”

He joined the service right out of Phillips Exeter Academy, when colleges were recruiting him to play lacrosse. He did two tours in Iraq, starting the first as an 18-year-old lance corporal and ending the second on the day he turned 21.

Why he joined: “I just decided I wanted to do something else. Kids my age were fighting overseas.”

A Russian and German major at West Point, he was assigned to a tank unit that at the start of the Iraq War penetrated nearly to the Iranian border. He helped to train Iraqi police and fought in the Sunni Triangle.

“Military veterans have a strong sense of consequences for their actions, which is something we can share in the classroom.”