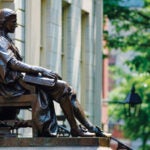 Around the Schools: Faculty of Arts & Sciences

Catherine Lord '70 to be honored at Arts First

Kicking off the Arts First festivities, visual artist, writer, and curator Catherine Lord ’70 will receive the 2010 Harvard Arts Medal. President Drew Faust will present the medal as part of an event hosted by the Learning From Performers Program at 5 p.m. April 29 in the New College Theatre.

Lord is the 17th distinguished Harvard or Radcliffe alum or faculty member to receive this accolade for excellence in the arts and contributions to education and the public good through arts. Past medalists have included poet John Ashbery ’49, composer John Adams ’69, M.A. ’72, cellist Yo-Yo Ma ’76, filmmaker Mira Nair ’79, and saxophonist Joshua Redman ’91.

As a visual artist, writer, and curator, Lord addresses issues of feminism, cultural politics, and colonialism. Her artwork has been exhibited at the New York Gay and Lesbian Film Festival, La Mama in New York City, the Los Angeles Gay and Lesbian Center, the DNJ Gallery in Los Angeles, and the Post Gallery in Los Angeles, among other venues. Her books include “Art and Queer Culture, 1885-2005” (forthcoming), “The Summer of Her Baldness: A Cancer Improvisation” (2004), and “Pervert” (1995).  She has organized presentations at venues including the University of California, Irvine Art Gallery, the Center on Contemporary Art in Seattle, and the Laemmle Theater in Los Angeles. Lord received her M.F.A. from the State University of New York at Buffalo in 1983. She is currently a professor of studio art and an affiliated faculty member in the Department of Women’s Studies and Department of Visual Culture at the University of California, Irvine.

For more information on the medalist or Arts First 2010 (April 29-May 2), visit the Office for the Arts at Harvard Web site.