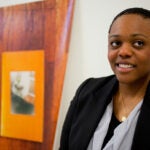 It was 2003. Harvard Business Press presented Koehn with a book prospectus from the Times. The idea? To compile interesting articles across the history of the paper, an assignment Koehn metamorphosed into “The Story of American Business,” which features more than 100 articles spanning 150 years.

“The NYT had worked on a few books that were syntheses on specific topics, but had never attempted anything of this depth and breadth,” said Koehn, who couldn’t bypass a chance “to follow the arc of time, that is, some of history’s most interesting individuals and events, through the eyes of men and women watching them in real time.”

Koehn, a historian and scholar of entrepreneurial leadership, calls the book “an incredibly exciting intellectual opportunity.”

It was an opportunity that included a lot of work. Koehn first had to decide which “thematic avenues the book would travel,” and spent three years simply reading Times backlogs.

“Then,” she said, “the real work began, the task of selecting the articles. About 100, from almost 15 times that many, that would make it in.”

Koehn’s themes are expansive but methodical. “From Wall Street to big business, from the transportation revolution to the information revolution — all of these subjects and more form the chapters of the book,” she said. “But these building blocks are laid upon the three-part foundation of business in America: the corporation, the changing nature of work, and defining moments in technology.”

A book of such historical intensity is ever-pertinent in today’s economic climate. “We forget, in our age of the ‘next new thing,’ that we are not the first generation to stand at a crossroads, despairing and uncertain of what’s to come,” Koehn said. “It was heartening to see how we as a people have navigated through such similar points as the end of the Civil War or the Depression. If today’s leaders are going to make sense of the current financial crisis and its significance, they need the breadth and depth of information that the Times affords — and they need to learn from their predecessors.”