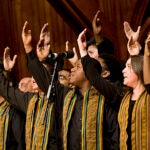 There’s nothing like a little neighborly love in early February to get the attention of Boston area hockey fans, but Tuesday night (Feb. 2) the No. 6-ranked Harvard women’s hockey team showed no love to Boston College (B.C.), drubbing the cross-river rival in the Beanpot opener at Bright Hockey Center, 5-0.

Solid goaltending on both sides kept the game scoreless for the first 38 minutes, but a power-play goal by junior forward Liza Ryabkina with 1:34 remaining in the second period gave the Crimson a 1-0 lead heading into the second intermission.

Three more goals by Ryabkina and a goal by Josephine Pucci ’13 blew the door wide open for Harvard, setting the stage for next week’s championship game, a No. 6-vs.-No. 7 matchup against Northeastern.

“I’m really happy about the way our kids played tonight from the beginning to the end of the game,” said Crimson head coach Katie Stone, who has led the program to nine of its 12 Beanpot titles. “We came out flying in the third period and certainly took advantage of our opportunities.”

Sweet revenge was finally attained for the Crimson, who had dropped the past three Beanpot games to the Eagles. The result was retribution of sorts, especially after a goal in the final stanza crushed Harvard’s championship hopes in last year’s 1-0 loss.

“To tell you the truth, we want to beat any team. … We don’t really care what the label says. We just want to play our best,” said Ryabkina after her second career hat trick and first four-goal day. But after a laugh, she added, “Yes, we did want to beat them pretty badly after a couple of rough games … against them.”

“This is a pressure-packed tournament. Everyone wants a Beanpot,” said Stone. “We value the Beanpot at Harvard University, and to be able to play for a championship in early February is a great experience….”

The Crimson have now won five of their last six games and will meet the Northeastern Huskies in the title game on Feb. 9 at 8 p.m. in the Bright Center for the 16th time in the tournament’s 32-year history. Harvard holds a 5-10 record in those games and a 12-16 record overall against Northeastern.