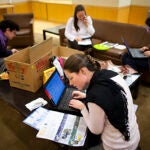 Walking into Massachusetts Hall’s main corridor, the first thing you’re likely to see is Mohsen Mostafavi’s gigantic statement. It’s mounted on one of the corridor’s five walls, the space for the third annual Mass Hall Student Art Exhibit, “Futures in the Present,” which was furnished by the Harvard Graduate School of Design (GSD), where Mostafavi is dean.

Printed in black on one side of an oceanic panel, the rest of the panel drifts off into a sea of small, textural GSD logos, which let Mostafavi’s message really pop. He wrote in one section that GSD’s program, which is “aimed at the conceptualization and construction of alternative and sustainable futures, has a footing in the ethical and political realms.”

Sprawling, blueprintlike plans deck the rest of the halls: arrays of architecture, landscape architecture, and urban design, which reflect Mostafavi’s principles and illustrate a better world.

In Maja Paklar’s design, an AIDS and tuberculosis clinic and research facility flourishes in Durban, South Africa. Paklar, GSD ’09, said it was “conceived as an interface between public and medical institutions that aims to overcome the stigmatization of disease by softening the social boundaries built up around the sick and impoverished population of South Africa.” It won the 2009 James Templeton Kelley Prize offered by the Boston Society of Architects.

Megan Panzano, GSD ’10, helped to curate the exhibit with Dan Borelli, the GSD’s director of exhibitions. Panzano mapped and measured Mass Hall to see what each wall could allot. “We wanted to treat each wall as a project,” said Borelli, hence the grand scale of the designs.

“Think of this exhibit as an unfolding of the School and its various departments,” said Panzano. “We wanted to capture the depth of work and represent different types of projects and research that students took on.”

The Mass Hall Student Art Exhibit was an offshoot of the 2007 Arts Task Force, which President Drew Faust commissioned and spearheaded. Among her many recommendations was that more physical spaces across campus be dedicated to art. This year marks a change in the exhibit which, since its conception in 2008, has featured undergraduate work.

Faust thanked the students for their projects, which she called “uplifting and aesthetic enjoyment.”

“We are delighted to have the GSD offer its professional eye and design eye … And thank you for what you’ll be leaving behind to inspire us through spring.”

Ph.D. candidate and exhibitor Peter Christensen, GSD ’09, called the displays “wonderful” and said, “It’s nice that the president was interested in our work.” But the exposure helps, too. “I know how many people come through this hall,” he said.

His exhibit came in book form and rests in the hall’s lobby. Titled “A Geopolitical Unarchitecture: Armenian Antiquity in Modern Turkey,” Christensen’s volume is one of many student works not hanging from the walls. “What we do is not just all visual,” he said. “Design is equal part writing and visual.”

Mostafavi, who dubbed the event a “fantastic opportunity,” was grateful for the “cohabitation, and the restraint of this wonderful hallway. It’s creative constraint. People who come to the exhibit will visit us at the Design School.”

“It’s great that our work is being brought to another building and being shared on another platform,” said Anthony Acciavatti, GSD ’09, whose colorful book, “Agri-cultural Regimes: Adventures in the Military-Agri-Cultural Complex in the American Midwest,” also sits in the lobby.

“It’s really valuable for us to pay more attention to the impact of design, architecture, and urban planning on the environment,” said Mostafavi. “This is everything that surrounds us.