Another piece of cancer puzzle falls into place 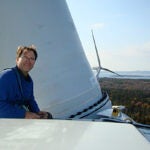 Turning to the wind

An international team of researchers has created a genome-scale map of 26 cancers, revealing more than 100 genomic sites where DNA from tumors is either missing or abnormally duplicated compared to normal tissues. The study, the largest of its kind, finds that most of these genetic abnormalities are not unique to one form of cancer, but are shared across multiple cancers.

“Our findings show that many genome alterations are universal across different cancers. Although this has been known for some types of changes, the degree to which so many alterations are shared was pretty surprising to us,” said senior author Matthew Meyerson, a Harvard Medical School professor of pathology at the Dana-Farber Cancer Institute and senior associate member of the Broad Institute of Harvard and MIT. “It suggests that, in the future, a driving force behind cancer treatment will be common genomic alterations, rather than tumors’ tissue of origin.” The work appears in yesterday’s edition of the journal Nature.

Cancers now are characterized largely by their symptoms: the organs in the body in which they first arise and the appearance of tumor cells under a microscope. Although this information is valuable, it fails to highlight cancers’ molecular underpinnings, which could be used in laboratories to discover new, more effective cancer therapies and in the clinic to improve diagnosis and treatment. A goal of
modern biomedical research is to fill this knowledge gap and describe all cancers based on what drives them — that is, the genetic aberrations that initiate and maintain tumor growth.

In 2004, a scientific team led by researchers at the Dana-Farber and the Broad Institute launched a project to map systematically the genetic changes across different cancers. They focused on a particular type of DNA change in which segments of a tumor’s genome are present in abnormal copies. Instead of the usual two copies, tumors often carry several copies of one piece of DNA (an “amplification”) or may lack it altogether (a “deletion”). These genetic abnormalities are known as somatic copy-number alterations, or SCNAs.

Like other types of DNA mutations that litter the genomes of tumor cells, most SCNAs do not necessarily play a meaningful role in cancer growth. But the ones that do serve as important signposts, pointing to the specific genes contained within them that help to promote and maintain cancers. The challenge lies in distinguishing these so-called drivers from their less influential counterparts.

“Studies like this require a large and diverse group of tumor specimens,” said first author Rameen Beroukhim, an assistant professor of medical oncology at Dana-Farber Cancer Institute and a researcher at the Broad Institute. “We are deeply grateful to our collaborators and to their patients, who generously shared samples with us.”

Using powerful genomic “chip” technologies, the researchers analyzed DNA from these samples, and combined their data with publicly available data from 600 more tumor samples to assemble a detailed catalogue of the SCNAs present in multiple tumor types. They found that the most common SCNAs tend to come in two sizes: relatively long, about the length of an entire chromosome or a single chromosome arm, and short, with an average size of about 1.8 million genetic letters, or 0.03 percent of the entire human genome.

The researchers focused their attention on the short, or focal, SCNAs which, due to their relatively compact size, can ease the task of pinpointing important cancer genes.

“Until recently, the analytic methods needed to support this kind of analysis were not available,” said first author Craig Mermel, a physician and Ph.D. student working in Meyerson’s laboratory and at the Broad Institute. “New advances by our group as well as many others have now made it feasible to systematically map genomic changes across thousands of samples and at high resolution.”

Of the 150 or so focal SCNAs they identified, Meyerson and his colleagues noticed that the majority did not coincide with genes already known to be amplified or deleted in cancer. Looking more closely at the genes that normally reside in these regions, the researchers found an enrichment of genes with important biological functions in cancer, such as cell death, or “apoptosis.”

This analysis helped to shed light on two genes, MCL1 and BCL2L1. Cancer cells with amplifications of these genes appear to rely on the genes’ activity for survival, suggesting important roles in maintaining tumor growth.

Perhaps most importantly, looking across the data for the various cancers, it became clear that most focal SCNAs are not unique to just one type of cancer, but are shared among multiple tumor types. In an analysis of 17 cancer types, the researchers found that most amplifications and deletions are present in more than one type. That suggests the genetic mechanisms that underlie these tumors are shared among them, and could someday lead to common strategies for treating them.

“These data signify an important resource for cancer gene discovery, but they’re only a first step,” said Meyerson. “With the ongoing revolution in genome technology, it will become possible to decode the genomes of thousands of cancers to reveal every genomic change.”