A molecule that destroys normal metabolism is found 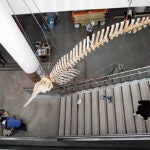 Overeating in mice triggers a molecule once considered to be only involved in
detecting and fighting viruses to also destroy normal metabolism, leading to
insulin resistance and setting the stage for diabetes, according to the results of a new study led by
researchers at the Harvard School of Public Health (HSPH).

The research specifically links
the immune system and metabolism, a pairing increasingly suspected in diseases
that include — in addition to diabetes — heart disease, fatty liver, cancer,
and stroke. Understanding how to regulate the molecule through targeted drugs
or nutrients could eventually change the way these diseases are prevented and
treated in humans. The study, published in tomorrow’s edition of the journal Cell, is available on-line now.

“When mice eat a normal diet, this molecule called PKR is silent,” said
senior author of the study Gökhan Hotamisligil, chair of the HSPH Department of Genetics and
Complex Diseases. “However, if a cell containing PKR is bombarded with too many
nutrients, PKR grabs other immune system molecules that respond to this food
attack and organizes a firing squad to shoot down normal processes, leading to
insulin resistance and metabolic dysfunction.”

The results provide compelling evidence that a process called “metaflammation”
occurs in the body, said Hotamisligil,

the James Stevens Simmons
Professor of Genetics and Metabolism. Metaflammation is inflammation triggered
by the metabolism of nutrients that occurs when the body processes food into
energy. Previous studies by Hotamisligil had demonstrated inflammation in
metabolic diseases such as obesity, type 2 diabetes, and heart disease in mice
and humans.

“We know that nutrients can be detrimental in excess quantities or when
they are in the wrong place at the wrong time,” Hotamisligil said. “But we
don’t quite understand which paths they travel that result in harm and produce
inflammation. PKR is a mechanism by which nutrients — necessary and beneficial
under normal conditions — cause damage to cells and organs.”

The researchers used sets of mice in their experiments. One set of mice
had PKR in their bodies, and the other set did not. The scientists then overfed
a group of PKR-positive and PKR-negative mice high-fat, high-calorie diets. The
overfed mice with PKR became obese and developed insulin resistance, while the
overfed mice without PKR gained significantly less weight and did not develop
insulin resistance, indicating that absence of PKR can alleviate harmful
metabolic effects due to overeating in mice.

Now the
researchers will turn their attention to identifying which nutrients cause the
adverse effects. “One of the difficulties in understanding how our diet is
integrated into disease risk is our inability to understand what specific
component of a diet is actually regulating particular responses in humans,”
said Hotamisligil. “So the discovery of this molecule actually gives us a very
specific way to identify the harmful components of the diet.”

Results from those studies could be available within a couple of years,
Hotamisligil predicted, after which human trials would be needed on potential
drugs or nutrients that could regulate PKR.

This study was supported by a grant from the National Institutes of Health. The
first author was Takahisa Nakamura, a research fellow in the HSPH Department of
Genetics and Complex Diseases who was supported by a Human Frontier Science
Program Fellowship Award and the Uehara Memorial Foundation. Other co-authors
are supported by fellowships from the Japan Society for the Promotion of
Science and the American Diabetes Association.