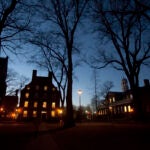 On a recent bitter January morning, Marcus Stern encouraged a group of Harvard undergraduates to experiment with citrus.

“What would happen,” he asked them, “if you stuck an orange under each armpit?”

The whimsical suggestion had real implications for the 20 young women and men who have chosen to forgo a midwinter vacation and return to campus for a new kind of intense study.

Stern, associate director of the American Repertory Theater/Moscow Art Theater School Institute for Advanced Theater Training at Harvard University (the A.R.T. Institute), was teaching a drama class, one designed to help the budding actors create a new character, using changes in voice and body positions that would render them unrecognizable. The orange experiment, he said, could lead to “physical adjustments” that they could incorporate later, without the aid of the fruit, into their transformations.

“The goal is to get them comfortable with fully transforming their voices and bodies so they can get closer to creating characters that are completely different from themselves,” Stern said, so they can act more “freely, impulsively, spontaneously.”

Using a deep register for her voice and sharp hand gestures, one undergraduate took on the role of a pope. Another portrayed a woman confined to a wheelchair.

The undergraduates are part of a new immersion program, a collaboration among the A.R.T. Institute, the Office for the Arts, and the Harvard-Radcliffe Dramatic Club (HRDC). During the three-week intensive workshop, they are learning a wide range of dramatic techniques and various aspects of acting. The curriculum includes workshops on comedic scenes, intensive study with a dialect coach, improvisation classes, and even seminars on the business of being an actor.

Students work with participants and faculty at the A.R.T. Institute, as well as prominent guest lecturers. Jim True-Frost, famous for his role on the HBO series “The Wire,” led a seminar on acting for the camera, and well-known director and Harvard alumnus David Hammond recently conducted a Shakespeare workshop.

“It has been very exciting for us to be able to show the undergraduates that in the graduate school it’s a much more in-depth, intensive approach to acting,” said the institute’s director Scott Zigler, who designed the new program’s curriculum.

While A.R.T. Institute faculty currently teach undergraduate classes as part of the Harvard College curriculum, for those students considering a graduate degree in acting or pursuing the craft directly out of college, said Zigler, the intensive course really gives them a look at the “nuts and bolts of the profession.”

The American Repertory Theater’s artistic director, Diane Paulus ’88, is the driving force behind the new collaboration.

In step with her commitment to the organization’s mission of “expanding the boundaries of theater” is Paulus’ intense desire for a broader engagement with the University. As a Harvard undergraduate, her love of the dramatic arts was shaped by her own experience with the A.R.T. Since taking on the directorship in 2008, she has been working closely with students across campus.

“Central to my goals and my new leadership at the A.R.T. is to reinvigorate the A.R.T.’s connection with the University and in particular the undergraduates,” said Paulus, who met with members of the HRDC her first day on the job to discuss how to forge a stronger relationship with students. When Paulus realized the opportunity at hand with the new winter break, a plan for the immersion program took shape.

Paulus said the three-week intensive gives “undergraduates the opportunity to immerse and experience themselves in graduate-level training through our curriculum that we traditionally offer to the institute students. … When I was a Harvard undergraduate, I would have jumped at this opportunity.

“We are really saying we are here, we are an important pedagogical resource for Harvard University, and this is a particular way we can offer our faculty, training, and expertise to the broader student body.”

Jack Megan, director of the Office for the Arts, who helped coordinate the housing for students returning to campus for the program, said the new initiative is an example of Paulus’ effort to create a “deeper, more integrated community among undergraduates, institute students, professional staff at the A.R.T., and other University departments. The attitude and tone of things is very ‘can do.’ It’s very exciting.”

In a further collaboration, Megan also helped secure the undergraduate Agassiz Theatre for the Tennessee Williams play “Stairs to the Roof,” being produced by the A.R.T. Institute. Harvard alumnus Mike Donahue ’05 will direct the production (Feb. 4-6), which will also include three of the workshop’s undergraduate students in its cast.

Hecht, an English concentrator with a secondary focus in dramatic arts, got hooked at age 6 with the role of a witch in a half-hour version of Shakespeare’s “Macbeth,” and is currently planning a career in acting or music.

“This is a taste of what real intense conservatory work might be like,” she said. It offers “the kind of intense technique work that is really helpful if you are thinking about going into the professional [entertainment] world.”

For Leverett House senior Carolyn Holding, who intends to pursue acting and is weighing graduate school with a move to New York City after graduation, the workshop has been an important part of her Harvard education.

She’s learned “how much there is [to acting],” she said, “and how little I know.”