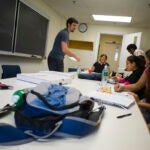 Visions of sugarplums may have faded with the end of the holiday season for many Allston youngsters, but an imaginative re-use of a garage on Western Avenue has given Allston families their own winter wonderland. That was the scene in Allston Friday night (Jan. 15) as more than 100 community residents flocked to the grand opening of the Harvard Allston Skating Rink.

The facility was so recently renovated that the smell of fresh paint lingered in the air. Harvard Executive Vice President Katherine Lapp said that the idea for the rink “surfaced before Christmas,” and that staffers from Harvard Real Estate Services, the Allston Development Group, and Harvard Public Affairs and Communications, all in close cooperation with the city of Boston, turned the project around in less than a month, from building the rink and securing permits, to painting and decorating the space.

“Coming here today and seeing people of all ages — and more and more people coming — is a validation of Harvard’s showing its support for Allston residents,” said Lapp, noting that the crowded, cheerful scene looked like a Norman Rockwell painting.

Savoring the night’s arctic thrill, parents watched their bouncing, skate-clad children from the periphery, including a Brighton resident named Caroline, who heard about the rink through her two children, who attend the Harvard Allston Education Portal. “It’s fantastic,” she said, as her kids skated by.

The temporary rink, located at 168 Western Ave., is a way to increase community-oriented uses of the University’s Allston properties while it looks for long-term building tenants. It will remain open until March 28.

“We are delighted to introduce an interim use that engages our neighbors and provides an inviting new space where families can spend time together this winter,” said Christine Heenan, vice president of Harvard Public Affairs and Communications. “We hope that, like the Harvard Allston Education Portal across the street, this will be both a gathering place and an enriching and lively anchor in the community.”

Brighton High School student David Yu, 17, took full advantage of the venue on opening night. It was the second time ever ice skating for Yu, who said he was no fan of the falls he was taking, which were plenty, as evidenced by his wet sweatshirt. “But I make an interesting wipeout,” he said, demonstrating his novel form for falling with grace. “This is too fun, even with the wipeouts.”

Allston Brighton Task Force member John Bruno was equally delighted by the festivities. “To utilize a space like this and to see young people smiling — and adults smiling, too — it’s a big thank you to the community,” he said.

Visitors to the rink can bring their own skates or borrow free pairs. Skates are available on a first-come, first-served basis, with limited numbers.

As the night wound down, families drank hot chocolate and collected raffle prizes, which included Harvard sports tickets and sweatshirts. Emcee Kevin McCluskey, senior director of community relations, handed off a coveted envelope filled with Harvard vs. Cornell hockey tickets. “You can’t get these tickets anywhere but here,” he told the crowd.

Meanwhile, back on the ice, mother Sonia Simoun helped her daughter Alya, 10, lace up her skates. “My children can walk here,” Simoun said. “We’re very excited.”