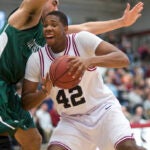 It’s not easy being Big Green

Mathematician Sophie Morel, who works at the intersection of algebraic geometry, representation theory, and number theory, has been named professor of mathematics in Harvard University’s Faculty of Arts and Sciences (FAS). She also has been appointed to the Radcliffe Alumnae Professorship at the University’s Radcliffe Institute for Advanced Study.

Morel was previously affiliated with the Institute for Advanced Study in Princeton, N.J., and the Clay Mathematics Institute in Cambridge, Mass., where she continues as a research fellow. The new appointments took effect Dec. 15.

“Sophie Morel is among the world’s most promising young mathematicians working in number theory, algebraic geometry, and representation theory,” said Jeremy Bloxham, dean of science in FAS. “Her doctoral thesis was extremely demanding and stunningly original, solving a problem that had been intractable for more than 20 years.”

“Sophie Morel will enrich the Radcliffe Institute and FAS communities, and Harvard more broadly, with her groundbreaking research and discoveries in mathematics,” said Radcliffe Institute Dean Barbara J. Grosz. “We are grateful to Radcliffe alumnae for enabling the recruitment of a distinguished scholar who embodies Radcliffe’s longstanding traditions of excellence and achievement.”

Morel’s work focuses at the heart of the Langlands problem, an area of number theory and representation theory that has seen dramatic progress over the past few decades.

Morel holds degrees from Université Paris-Sud, which awarded her a Ph.D. in 2005. From 2005 to 2009 she was a member of the Institute for Advanced Study and a research fellow at the Clay Mathematics Institute, an affiliation she will maintain until 2011.

Professorships at the Radcliffe Institute are designed to bring a succession of eminent individuals to the institute and to attract outstanding faculty to tenured Harvard positions. The Radcliffe Alumnae Professorship, endowed by alumnae and friends of Radcliffe, was established so that new tenured FAS professors could spend four semesters at the institute during their first five years at the University. As the second Radcliffe Alumnae Professor, Morel will work among the institute’s community of fellows.