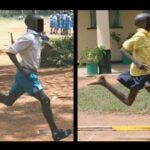 If you wonder about humanity’s origins, try the kitchen

Richard Wrangham has a simple answer when asked where humans came from: “the kitchen.”

Wrangham, the Ruth Moore Professor of Biological Anthropology, talked about his theories on the importance of cooking in the long evolutionary process that made humans human during a lecture at the Harvard Museum of Natural History (HMNH) Wednesday night (Jan. 27).

Cooking confers several advantages over eating food raw, but most importantly, allows consumers of cooked food to extract far more energy during digestion, according to Wrangham, whose talk was the first in the museum’s spring “Food for Thought” lecture series.

Even a 5 percent increase in ripe fruit available to chimpanzees can give them a biological advantage, lowering the time between chimpanzee births by four months. Cooking would have conferred an even more dramatic advantage on early humans struggling to find food by increasing the amount of energy from starches and protein extracted during digestion by 50 percent or more.

“There’s this huge fantastic mystery: Where did humans come from? I think we came out of the kitchen,” Wrangham said.

Wrangham, who was introduced by HMNH Executive Director Elisabeth Werby, conducts much of his research on chimpanzees at the Kibale Forest in Uganda, where he is co-director of the Kibale Chimpanzee Project. His most recent book, “Catching Fire: How Cooking Made Us Human,” details his ideas about cooking and human evolution.

It’s likely no coincidence, Wrangham said, that cooking is universal in human societies and that those who today insist on eating a raw food diet lose weight to the point that half of women on those diets stop having periods. The reason, Wrangham said, is that our bodies have adapted to the easy extraction of energy from cooked foods, and there’s no going back. Cooking has not only allowed us to have smaller teeth, it’s also allowed us to have shorter guts relative to our bodies than any other primate. Our guts can’t extract as much energy from raw foods as those of our primate cousins or our pre-human ancestors.

“People think that animals eat raw food, people are animals, so people can eat raw food. But humans are different kinds of animals,” Wrangham said. “Nobody has appreciated how absolutely vital cooking is. We need it. We absolutely need it.”

While many scientists put the advent of cooking at 200,000 to 300,000 years ago, Wrangham said he believes that’s far too recent. By that time, Wrangham said, our family tree had already produced modern humans, homo sapiens, so the advantages that cooking confers wouldn’t have had much time to affect our evolution.

Though the archaeological evidence — fire remains at ancient campsites — is fairly solid through several hundred thousand years ago, Wrangham said the scientific evidence doesn’t provide a clear date when cooking began. There are also possible sites significantly earlier, with the evidence of fires and cooking slowly fading as researchers look earlier in human history.

To Wrangham, the answer to the question of when cooking arose may lie not in fire pit remains, but in human and pre-human anatomy. Using the length of the gut as an indicator, Wrangham looks much deeper into the past — 1.9 million years ago — to homo erectus. Homo erectus, Wrangham said, had the smaller rib cage and narrower pelvis, also characteristic of modern humans, that would hold a smaller gut. If cooking first occurred with homo erectus, that period would have provided the evolutionary time needed to create the dependence on cooking that modern humans have.

Wrangham’s ideas about the importance of cooking have their roots in personal experience. As a young graduate student working with primatologist Jane Goodall, Wrangham would spend long days in the field watching chimpanzees. He would often taste the foods chimps were eating, sometimes out of curiosity and sometimes out of hunger. The best of them were small fruits that were not very flavorful. In times of food scarcity, chimps are known to eat less-favored foods and even wood, something humans would have a hard time subsisting on. Instead of chimp food, Wrangham found himself looking forward to a steaming bowl of mashed potatoes or other cooked food when he got back to camp.

“If you want to rely on eating what they eat all day long, you will be very hungry,” Wrangham said.

In more recent years, he delved into the subject further, finding that humans can extract just about half the energy available from raw starch. When cooked, that rises to close to 100 percent. Similar differences are seen with the digestibility of proteins. Other benefits of cooked foods include reducing bacteria, detoxifying some poisons, and softening foods’ texture, which allows humans to use less energy to chew and digest. If we chewed our food as much as the great apes do, Wrangham said, we’d spend five or six hours a day just chewing.

Cooking, Wrangham said, likely had “deep biological significance” affecting not just our diets, but also our life history. When humans could cook and serve softer foods, children could be weaned earlier. They could increase their activities because cooking made more energy available. Cooking may even help to explain the sexual division of labor. Though this needs further exploration, Wrangham said that a possible reason that women are responsible for cooking in every culture is that cooking fires are easy to detect in the wilderness and could potentially attract males who were unsuccessful hunting. It is possible then, Wrangham said, that one outgrowth might be that males would have had to learn to fend off other males who came looking for a handout.

Cooking may have played a further role in the rise of human social structures, as the change in food consumption from self-picked berries to a pile of common food would require some way to determine who gets what.

Cooking “is a fantastic advantage, so much so that you have to do it,” Wrangham said.