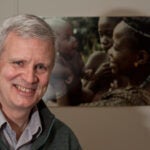 Ask
people who suffer from migraine headaches what they do when they’re having attacks,
and you’re likely to hear “go into a dark room.” Although it’s long been known
that light makes migraines worse, the reason why has been unclear. Now
Harvard scientists at Beth Israel Deaconess Medical Center (BIDMC) have identified a visual
pathway that underlies sensitivity to light during migraines.

The
findings, which were published in yesterday’s advance online issue of Nature
Neuroscience, help to explain the mechanism behind this widespread condition.
The research involved blind individuals and those with normal eyesight.

A
migraine is a one-sided, throbbing headache associated with a number of
symptoms, including nausea, vomiting, and fatigue. Migraines are notoriously
debilitating and surprisingly widespread, affecting more than 30 million people
in the United States alone. Migraine pain is believed to develop when the
meninges, the system of membranes surrounding the brain and central nervous
system, become irritated, which stimulates pain receptors and triggers a series
of events that lead to the prolonged activation of groups of sensory neurons.

“This explains the throbbing headache and accompanying scalp and neck-muscle
tenderness experienced by many migraine patients,” said the study’s senior
author, Rami Burstein, a Harvard Medical School professor of anesthesia and critical care medicine at
BIDMC.

In addition, for reasons that have been unknown, nearly 85 percent of migraine
patients are also extremely sensitive to light, a condition known as
photophobia.

“Migraine patients may wear sunglasses, even at night,” he said, adding that
the dimmest of light can make migraine pain worse. Extremely disabling,
photophobia can prevent patients from such routine activities as reading,
writing, working, or driving.

It was the observation that even blind individuals who suffer from migraines
were experiencing photophobia that led Burstein and first author Rodrigo Noseda
to hypothesize that signals transmitted from the retina via the optic nerve
were somehow triggering the intensification of pain.

The investigators studied two groups of blind individuals who suffer migraines.
Patients in the first group were totally blind due to eye diseases such as
retinal cancer and glaucoma; they were unable to see images or to sense light,
and therefore could not maintain normal sleep-wake cycles. Patients in the
second group were legally blind due to retinal degenerative diseases such as
retinitis pigmentosa; although they were unable to perceive images, they could
detect the presence of light and maintain normal sleep-wake cycles.

“While the patients in the first group did not experience any worsening of
their headaches from light exposure, the patients in the second group clearly
described intensified pain when they were exposed to light, in particular blue
or gray wavelengths,” said Burstein. “This suggested to us that the mechanism
of photophobia must involve the optic nerve, because in totally blind
individuals, the optic nerve does not carry light signals to the brain.

“We also suspected that a group of recently discovered retinal cells containing
melanopsin photoreceptors [which help control biological functions including
sleep and wakefulness] is critically involved in this process, because these
are the only functioning light receptors among patients who are legally blind.”

The scientists took these ideas to the laboratory, where they performed a
series of experiments in “an animal model” of migraine. After injecting dyes
into the eye, they traced the path of the melanopsin retinal cells through the
optic nerve to the brain, where they found a group of neurons that become
electrically active during migraine.

“When small electrodes were inserted into these ‘migraine neurons,’ we
discovered that light was triggering a flow of electrical signals that was
converging on these very cells,” said Burstein. “This increased their activity
within seconds.”

And even when the light was removed, he said, these neurons remained activated.
“This helps explain why patients say that their headache intensifies within
seconds after exposure to light, and improves 20 to 30 minutes after being in
the dark.”

The
discovery of
this pathway provides scientists with a new avenue to follow in working to
address the problem of photophobia.

“Clinically, this research sets the stage for identifying ways to block the
pathway so that migraine patients can endure light without pain,” said
Burstein.

In addition to Noseda and Burstein, co-authors include BIDMC investigators
Vanessa Kainz, Moshe Jakubowski, Joshua Gooley, and Clifford B. Saper, along
with Kathleen Digre of the University of Utah. The study was funded by grants
from the National Institutes of Health and from Research to Prevent Blindness.