‘Herskovits at the Heart of Blackness’ 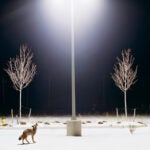 PBS will air “Herskovits at the Heart of Blackness,” a documentary that examines the towering influence of controversial anthropologist Melville Herskovits, on Feb. 2 at 10:30 p.m. as part of the series “Independent Lens.” Actress Maggie Gyllenhaal will host the program.

“Herskovits at the Heart of Blackness,” produced by Vincent Brown, the film’s director of research, features a mix of interviews, animation, and photo collage reenactments. The film asks: What are the consequences when a people — in this case, black and African people — are denied the opportunity to define themselves and their culture? Llewellyn Smith and Christine Herbes-Sommers also produced the film.

Herskovits founded the Department of Anthropology at Northwestern University in 1938, and established the American program in African studies there a decade later.

Brown, professor of history and of African and African American Studies, is the author of “The Reaper’s Garden: Death and Power in the World of Atlantic Slavery,” which received the Merle Curti Award, the James A. Rawley Prize, and the Louis Gottschalk Prize in 2009.

For more on the film, and to check your local listings, visit PBS.org.