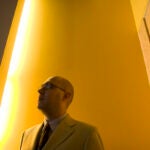 A group of visiting experts and Harvard scholars offered a grim prognosis for the success of the health care reform proposals before Congress during a symposium at Harvard Medical School (HMS) on Monday (Jan. 11).

Even as House and Senate lawmakers work toward reconciling the health care bills they passed late last year and submit a unified plan for President Obama’s approval, the panel, hosted by HMS and its Department of Health Care Policy, predicted a tough and eventually unsuccessful road ahead for the effort.

According to the participants, an ineffective governmental system, a flawed funding structure leading to massive debt, and a widening government involvement in personal health care decisions are just some of the problems that are likely to doom the reform proposals.

“I am very pessimistic about what you are going to be able to do,” said Allan Detsky, a professor at the University of Toronto.

The lone Canadian on the panel, Detsky, a Harvard-trained doctor, argued that the main problem facing health care reform in the United States involves the country’s governmental structure. He said it is far easier to approve legislation under a parliamentary system such as that in Canada, where the executive and legislative branches are “always together” when there is a majority government. Such alignment leads more readily to legislation, such as the comprehensive 1984 Canada Health Act that mandated universal coverage.

“We have party discipline. The caucus will debate the policy, the cabinet will decide what the policy is going to be, the prime minister puts the bill out there, and if you are a member of the ruling party and you don’t vote for it, you are kicked out. That’s the way it works,” said Detsky. “We have a government that can do things … your government system prevents you from doing things.”

The congressional health care plans are “not on the right track,” don’t acknowledge the need for trade-offs, and leave difficult decisions about how to contain costs to future generations, said Daniel Kessler, a professor at the Stanford Graduate School of Business.

“The current bill confuses access with insurance, which is going to lead us to a world of unsustainable deficits, very high implicit marginal tax rates, and increased government controls of people’s personal decisions in exchange for health benefits that are at best uncertain. It has the seeds of some successful cost-containment policies, which is good, but unfortunately it pushes the hard choices on that front off to the future.”

The president and CEO of the Game Show Network seemed an unlikely panelist. But a saddening experience with the U.S. health care system left David Goldhill with a personal perspective to add to the discussion. He began exploring the health care industry in depth after his elderly father died from an infection contracted in 2005 while receiving hospital care. Goldhill, who recently authored the article “How American Health Care Killed My Father” in The Atlantic magazine, argued for a return to having the patient act as consumer.

“What I got out of that experience was a realization that, in this most important service in my father’s life, he wasn’t really the customer of the hospital. Medicare was.”

Goldhill’s recommendations for reform included establishing a national catastrophic policy, requiring that people save for their health care and pay for part of it, and drawing consumers, who “need to be more empowered,” back into the system. He argued that the current congressional bills, which offer subsidies to expand insurance coverage and top-down systems of cost control, “haven’t worked before,” and “I am skeptical it’s going to work now.”

There was one optimistic voice in the debate. Harvard’s David Cutler, Otto Eckstein Professor of Applied Economics, noted that the plans introduce helpful changes, including reforms that bundle payments for patients, once scattered across hospitals and among doctors, into one place. They also incorporate performance payments into Medicare by only rewarding providers who deliver solid service, and offer a holistic approach to health care, one that oversees the transition of patients from one form of care to another and helps to navigate them through “the most complicated system of any industry in the economy.”

Yet even Cutler, who was senior health care adviser to Barack Obama’s presidential campaign, framed his optimism with caution.

“This is a path, not a leap. What we have to do is reform the health care system over the next decade, not reform it overnight.”