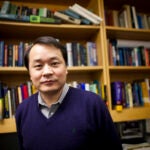 Xie to receive award from DOE

Members of the Harvard community are invited to offer nominations and advice regarding the search for a new member of the Harvard Corporation, the University’s executive governing board. The search arises in light of the December announcement by James R. Houghton that he plans to step down from the Corporation at the end of the academic year, following 15 years of service. The search will be led by a joint committee of the governing boards including the following members:

By charter, new members of the Corporation are elected by the President and Fellows with the counsel and consent of the Board of Overseers.

Confidential advice and nominations may be directed by e-mail to corporationsearch@harvard.edu or by letter to the Corporation Search Committee, Loeb House, 17 Quincy St., Cambridge, MA 02138.