A first for Harvard 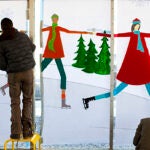 For the first time in Harvard’s history, more than 30,000 students have applied for undergraduate admission.  Applications have doubled since 1994, and about half of the increase has come since the University implemented a series of financial aid initiatives over the past five years to ensure that a Harvard College education remains accessible and affordable to talented students from all economic backgrounds.

Two other factors also may have played a role in reaching this historic number.  Three years ago, Harvard eliminated its early admission program, leveling the playing field for financial aid applicants and providing more time each fall to recruit students.  At the same time, Harvard established the new School of Engineering and Applied Sciences, which, under the leadership of Dean Cherry Murray, is increasing the visibility of Harvard’s excellence in this area.  Applications from students interested in engineering have risen considerably more than applications as a whole.

“The continuing economic uncertainty, with its accompanying high unemployment and underemployment, has made affordability a crucial consideration for an unprecedented number of families,” said William R. Fitzsimmons, dean of admissions and financial aid.  “The unwavering commitment of President Drew Faust, Dean of the Faculty of Arts and Sciences Michael Smith, and Dean of the College Evelynn Hammonds to ensure that Harvard remains open to talented students from across the economic spectrum sends a powerful message to those aspiring to higher education,” he said.

Precise figures on the number of applicants are not yet available, since applications are still being processed.  The final total will likely be about 5 percent ahead of last year’s 29,114, or about 30,500.

This year’s results were achieved in the context of economic constraints that ultimately led to considerable change and innovation.  Like much of Harvard, the Admissions and Financial Aid Office was operating with fewer resources, after trimming its unrestricted operating budget by 15 percent.  “Faced with this challenge, our staff worked together to develop new ways of addressing our most important priorities,” said Fitzsimmons. “The changes we have made will make us more effective now and in the future at reaching out to the nation’s and the world’s best students.”

With a staff that is 10 percent  smaller, a travel budget reduced by half, and the replacement of several much larger publications with a single eight-page brochure, the office has made sweeping advances in its use of electronic communications.  The Web site, message boards, e-mail, and Internet conferencing outreach by staff have been greatly enhanced.  In addition, alumni and alumnae redoubled their efforts to contact students and schools in their local areas.  “We are extremely grateful to our alumni and alumnae for taking on a greater role in visiting schools, attending college nights, and talking with students and families,” said Marlyn E. McGrath, director of admissions.  “Of course they will also interview a record number of candidates this year, providing assistance in our decision-making process and building relationships with admitted candidates that can lead to their matriculation here,” she said.

The Admissions Office relied on its nearly 20-year-old joint-travel program with Duke University, Georgetown University, the University of Pennsylvania, and Stanford University to visit with prospective students, their parents, and guidance counselors in 120 cities.  A similar program continued in 20 cities, teaming with Princeton University and the University of Virginia.  The Admissions Office maintained its full support of the Undergraduate Minority Recruiting Program and the Harvard Financial Aid Initiative, student organizations that aid recruitment throughout the year.

The office also is using new technologies and operating procedures to handle the processing and evaluation of the record number of applicants.  Documents — such as applications and counselor and teacher reports — are scanned electronically with an imaging system, ensuring easy recovery and making them instantly available to application readers and to admissions committee selection meetings.  Improved Web site services for alumni and alumnae enable applicant-interview reports to be submitted electronically and made available immediately as well.

Beyond the increase in numbers noted earlier, there are relatively few differences in the composition of this year’s applicant pool compared with last year’s. The gender breakdown remains about 50/50, and minority numbers are much the same (though still incomplete because some coding takes place during the reading process). Major academic preferences mirror last year’s, except for the larger increase in engineering, as well as associated increases in the physical sciences and computer science.  The geographical distribution is close to last year’s, with larger-than-average increases in the western United States and abroad.

Admissions officers are now reading applications in preparation for selection meetings, the careful, individualized process that begins on Jan. 30 and concludes March 20.  Notification letters to all applicants will be mailed on April 1, and e-mails will be sent later that day to those — usually about 95 percent — who request that additional notification.

“A visiting program for admitted students is scheduled for April 24 through 26,” said Valerie Beilenson, program director. Admitted students have until May 1 to make their final college selections.