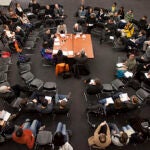 He brings biosensors, mini-machines to life in lab

Once a top physics student who aspired to study black holes, Donhee Ham turned his sights from the huge to the small, from a study of the spacious skies above to tiny quantum wires, transistors, and integrated circuits.

Ham, who was named Gordon McKay Professor of Electrical Engineering and Applied Physics in July, designs silicon chips containing millions of transistors for radios and computers, but his unique skills come out in projects that blend circuit-building with physics for unconventional applications and new scientific pursuits. Ham built the world’s smallest nuclear magnetic resonance (NMR) system by controlling atomic nucleic motions on a silicon chip, for example. The system, 1,200 times lighter than a commercial instrument, can be used as a handheld biomolecule sensor for disease screening, oil detection, and quantum computing.

“He’s using his skill as an electrical engineer to go into other fields and really make an impact,” said Robert Westervelt, Mallinckrodt Professor of Applied Physics and of Physics.

In announcing Ham’s promotion, Cherry Murray, dean of the School of Engineering and Applied Sciences, said Ham’s work at Harvard has helped to boost the School’s presence in electrical engineering. She hailed his “nearly encyclopedic understanding of physics and solid-state circuits,” which, she said, has led to creative and innovative applications in diverse fields such as biotechnology and medicine.

In creating the mini-NMR system, Ham and graduate student Nan Sun rethought how NMR works. A magnet is essential to NMR. Because a larger magnet yields a stronger signal, most NMR machines use bulky magnets. Sun and Ham took an opposite approach, using a magnet only the size of a Ping-Pong ball and building a high-performing radio-frequency silicon chip that can retrieve the signal weakened by a small magnet. The result is a 0.2 kilogram NMR system that can be held in the palm of the hand. It is not only 1,200 times lighter than a conventional NMR system, but also 150 times more sensitive.

Another project in Ham’s lab seeks to observe and engineer a state called “plasmonic resonance” in a metal where many electrons vibrate together as a group. The state has long been observed in optics, but at a very high rate of vibration. Ham’s pursuit is observing plasmonic resonance at a slower vibration rate — hundreds of billions of cycles per second — which falls in the electronics domain. The work, conceived by doctoral student Xiaofeng Li and carried out by Li and graduate student William Andress, envisions enabling plasmonic resonance in the electronics domain by exploiting the unique properties of tiny metals called “quantum wires.”

If researchers can create waves, Ham said, they will be able to learn more about electron-electron interactions in quantum wires. Practically, the study could lead to the development of new types of resonators and transistors, Ham said, which could suggest a new avenue for electronics.

He began working in astrophysics under Barry Barish, Caltech’s Linde Professor of Physics. Though Ham loved physics, during his first year his career interest shifted to a more practical field. After considering chucking it all for law or business, he settled on electrical engineering as an area where he could put physics to use. His doctoral work examined the statistical physics of circuits and earned him the Wilts Prize, given for the best electrical engineering thesis at Caltech.

After Ham earned his Ph.D. in 2002, he came to Harvard as an assistant professor. He became associate professor in 2006, and Loeb Associate Professor of the Natural Sciences in 2007.

“I owe my career to my teacher [Barish] and students,” said Ham. “Barry taught me how to do and enjoy science and how to help others. When I was quitting physics and not knowing what to do next, Barry generously went out of his way to support me. He said it was an investment in young people.”

“Not only did Xiaofeng Li, International Physics Olympiad gold medalist and two-time top ranker of the U.S. Intercollegiate Physics Competition, devise the plasmonics work with his superb science,” Ham said, “but he solved in two weeks a circuit noise problem that avoided solution for 40 years, revealing a surprising, beautiful connection between classical circuits and quantum electrodynamics. Xiaofeng is an incredibly deep and clear thinker who has an inside track to truth.”

Discussing another gifted contributor, Ham said that Andress, 2004 Hoopes Prize winner, “created tiny electromagnetic and plasmonic devices I could not think of.”

On Nan, who is a top graduate from Tsinghua University and a two-time Harvard Teaching Award winner, Ham said: “Nan should have received all the recognition I’ve received for the NMR work, for he singlehandedly and brilliantly built a series of ever-shrinking NMR systems in just one year, with the highest intellectual and technical virtuosity and scientific breadth.”

“I am blessed to work with students with the highest quality of minds,” Ham said.

Ham’s physics background, Westervelt said, makes him a good collaborator with physicists. For example, Westervelt has found that when he talks with chip designers, he finds that they understand the project, but not the physics behind it. In talking with Ham, Westervelt added, it’s apparent he understands not only the engineering but its underlying science, making him a good sounding board for ideas.

“He’s a very creative guy who knows his science as well as engineering. He not only understands an idea, he can deliver the goods,” Westervelt said.