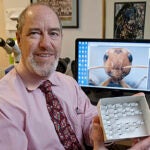 Tracking insects for work and play

It was nearing 2 a.m. on a spring night in 1990, and 24-year-old Diane Paulus was unwinding with a group of young actors who, like her, had just completed a round of acting classes with the legendary director Mike Nichols. Inevitably, talk turned to what the future might hold. Most of them envisioned careers as performers, but Paulus startled the group by announcing, as though it were the most natural thing in the world, “I want to be Robert Brustein and run the American Repertory Theater.”

Fast-forward to 2008. Paulus, now one of the hottest theater and opera directors in the country, has indeed just been named to Brustein’s former job, artistic director of the ART. As she looks ahead to her first slate of shows in the fall of 2009, again she sets the bar at lofty and perhaps unwise heights: “My goal for my season at the ART is that every show is an event….”