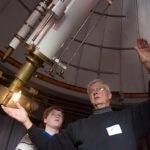 The oldest rivalry in college football dates to 1875, when Harvard and Yale played a bruising game that resembled rugby more than modern football. Back then, fans journeyed by train, horseback, and foot from around New England to view the rough-and-tumble spectacle. Old sepia photographs show Harvard Stadium filled to overflowing, with now-unlikely scores of 0-0.

The 1968 game may have been the most memorable of 126 contests. That was when Harvard scored 16 points in the final 42 seconds to tie, generating the famous headline, “Harvard beats Yale, 29-29.” In this year’s game, held at the Yale Bowl, Harvard again rallied late, this time to win. Still, scores aside, this is more than a football game. At stake are bragging rights for graduates and students who compete with glee clubs, marching bands, and tailgate spreads, ribbing their rivals to gain the upper hand, keeping their jocular rivalry vibrant.