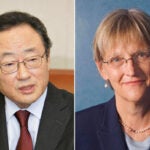 Freshman forward Kaitlin Spurling of the Harvard women’s hockey team was named ECAC Hockey Rookie of the Week on Dec. 15 after netting the game-winning goal in the second period of the Crimson’s 2-1 victory over UConn.

The Crimson return to the ice in the new year when they hit the road to face Princeton on Jan. 8 and Quinnipiac on Jan. 9.