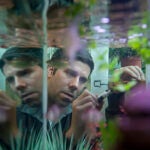 Harvard School of Public Health Dean (HSPH) Julio Frenk called Tuesday (Dec. 15) for greater international cooperation on health issues affecting populations around the world, saying the globe has entered a new era where the nature of disease and death is changing, and where domestic and global health are intertwined.

Frenk, who served as Mexico’s minister of health before coming to Harvard, said knowledge is the greatest weapon against illness in this new health era, and he called for efforts to beef up research capacity in the developing world, greater access to scientific knowledge internationally, and an emphasis on translating research knowledge into clinical practice and government programs that will benefit the sick.

Frenk made these points as he delivered the 2009 David E. Barmes Global Health Lecture at the National Institutes of Health (NIH) in Maryland. The 10-year-old Barmes Lecture is the most prestigious in a series of named lectures at the NIH each year, according to NIH Director Francis Collins. Previous speakers include former NIH Director and Nobel Prize winner Harold Varmus in 2008 and former HSPH Dean Barry R. Bloom in 2006.

Frenk said the health challenges facing the world today demand international cooperation because they’re beyond the resources of a single nation to fight.

“I am convinced that no individual country, no matter how well-endowed with human and financial resources, can generate on its own an effective response to the most pressing health challenges of our time,” Frenk said. “Global health … is not foreign health, nor is global health the opposite of domestic health.”

Today’s global health picture is far more complex than in the past, Frenk said. The days when communicable diseases were mainly the problem of poor nations and when chronic ailments tied to lifestyle, such as heart disease and diabetes, were mainly problems of rich nations are over. HIV, swine flu, and other infectious diseases have affected people everywhere. Similarly, he said, chronic ailments related to a Western lifestyle are increasingly a problem in developing nations, as people there abandon traditional diets and adopt Western habits, with an accompanying increase in heart disease, obesity, diabetes, and other ills.

Who gets sick is also changing as the world’s population ages, Frenk said. Lifespan has seen considerable gains in the last century, rising from about 30 in 1900 to 66.6 years today. In 2000, older people outnumbered younger people on Earth for the first time.

Two other milestones, also passed in recent years, help to highlight how the world’s population is changing. In 2003 the global birth rate slowed to “replacement fertility” — where women had just enough young to replace the mother and father — for the first time. And in 2007, also for the first time, Earth’s urban population outnumbered its rural population.

Life expectancy and fertility statistics don’t just describe a changing world, they also provide a snapshot of the vast inequities in global health. Though global life expectancy has risen, the range is vast. Life expectancy is longest in Japan, at 82, and shortest, just 32, in Swaziland.

As with life expectancy, fertility statistics also highlight global inequity, ranging from a low of 1.09 births per woman in Singapore and 1.23 in Lithuania, to 7.75 in Niger.

Frenk believes that the days when the global health picture could be understood in the framework of communicable versus noncommunicable disease are over. Instead, he said, the global health picture is best understood now within a framework of chronic ailments that people fight for years or even a lifetime, versus acute ailments that strike, do their damage, and then fade.

“It used to be that the experience of disease was a series of acute episodes from which one recovered or died,” Frenk said. “Now people spend substantial parts of their lives in less than perfect health, coping with chronic conditions. Illness may not kill us, but it always accompanies us.”

Though health issues are not limited to developing nations, they’re particularly severe there, Frenk said. The problems of the poor have multiplied, he said, as health ills migrated from developed nations — such as unhealthy lifestyles, pollution, unsafe products, and poor working conditions — and have been heaped atop more familiar dangers, such as curable but neglected diseases and conditions such as malnutrition, malaria, and poor reproductive health.

“The problems only of the poor, like malaria and maternal mortality, are no longer the only problems of the poor. There are some things only the poor suffer. Only poor women die in childbirth. Only poor children die of malaria,” Frenk said.

Though the challenges may be daunting, Frenk said, there is more opportunity now to address the world’s health ills than ever. Global health has a prominent place today on the international agenda — with an accompanying increase in funding — and there is great desire among young people to improve global health, which is drawing talented people into the field.

Frenk also said there is an urgent need to upgrade the research capacity of poor and middle-income countries. He proposed three tiers of improvement, from capacity building for countries with little research infrastructure, to capacity strengthening for those with some existing research infrastructure that could benefit from expansion and diversification, to performance enhancements for those with established programs that would benefit from renewed investment and stronger connections to global knowledge networks.

“I remain fundamentally optimistic in our capacity to face increasingly complex health challenges,” Frenk said. “As we enter a new era of global health, knowledge will continue to be the key asset to sharpen our understanding of problems and to create novel solutions. In our turbulent world, still scarred all too often by intolerance and exclusion, science remains as the most powerful force for enlightened social transformation.”