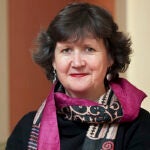 By Lisa Jing ’11 History and Literature

The Friday before Halloween, I found myself squatting in a pile of leaves. Above me hung Christmas lights. In front of me was a slideshow of an abandoned German theme park. To my right was an imitation of “A Bar at the Folies Bergère.”

I was in the Adams House ArtSpace, which had been temporarily transformed into “Forsaken Places,” the title of the Spoken Word Society’s fall open-mic event, the brainchild of Anna Polonyi ’10.

Since sophomore year, I have been a regular attendee of Spoken Word events: from poetry and music over samosas in Kirkland Junior Common Room to quieter nights at Gato Rojo. I remember the first time Polonyi urged me to come. She had heard from a mutual friend about how much, though how privately, I liked to write.

When I declined her invitation to read, Polonyi was resolute. I thought my reasons were natural: I disliked attaching a face to my writing. I wanted to distance authorship. I felt awkward rising from an audience of aspiring writers and claiming that I, too, was an author. I, too, deserved their attention. While I might paint myself as humble and awkward, I was genuinely scared then.

Polonyi pointed out, “You can only get better if you share with other people.” I agreed, but I wanted to be the ghost at my own funeral, reaping the comments, praise, and criticism elicited by my writing, anonymously.

The Spoken Word open mic is a rare democratic space for Harvard student artists. Presenters span poets, prose writers, diary keepers, rappers, and musicians. As editors of The Gamut, Harvard’s poetry magazine, Liza Flum ’10 and Sharon Wang ’10 agreed with me, there are two conflicting impulses in the Harvard writing community. One is a blameless appreciation of literature, a great love of and need for writing. The second is the problematic tendency to build hierarchies.

Often, this second tendency flares up not out of cruelty but necessity. For example, both Flum and Wang are writing two of the coveted poetry theses in the English Department. The spots are limited. Flum and Wang happen to be two of the most talented and humble people I know. However, the competitive process to secure a creative thesis often stirs bad blood. They recall uncomfortable moments in their poetry workshops when students were unnecessarily judgmental, rather than supportive of, their peers’ work. Likewise, the process for getting published can leave unsuccessful students feeling marginalized.

The problem that we noticed is psychosocial. Not only are struggles for superiority, recognition, and validation annoying, but they are damaging. They distort a student’s ability to produce good writing.

Though Flum and Wang champion good sportsmanship, they are not without critical standards. The Gamut puts out only one issue per year because, according to Wang, it is “extremely difficult” to compile a magazine of poems of a high caliber. The Gamut also hosts an annual poetry competition. Last year, former U.S. poet laureate Robert Pinsky judged.

The point is that quality need not be sacrificed for accessibility. The Gamut’s weekly meetings are open: All students are invited to sit in the Lowell private dining hall and discuss submissions. Likewise, Spoken Word hosts weekly workshops. The two organizations fulfill the basic need for open, inclusive, and critical spaces in which students can improve their craft.

The second week of November, I heard Michael Ondaatje, poet and novelist, speak at the Sackler Museum. Being a fanatic, I arrived an hour early and situated myself in the front row. Ondaatje sat barely three seats away. I was suddenly struck: What if I didn’t like him as a person? Generally, I have always separated a writer from his text. But when I was in such close breathing, laughing, and touching space to Ondaatje, I suddenly could not ignore that he was human. That his ethics, the beauty of his prose, the characters whom I intimately recalled still originated from him. If I disliked him, I would feel inevitably betrayed by the hypocrisy between text and author.

Luckily, I liked Ondaatje. Even luckier, I like Flum, Wang, and Polonyi. As Flum observes, writing is still a community service. It is the responsibility of the author to be mindful of what he provides his audience. Fortunately for me, it was a bed of leaves.