Light used to map effect of neurons on one another 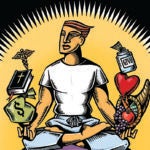 All-optical technique determines when neurons inhibit or excite one another

Harvard scientists have used light and genetic trickery to trace out neurons’ ability
to excite or inhibit one another, literally shedding new light on the question
of how neurons interact with one another in live animals.

The work is described in the current issue of the
journal Nature Methods. It builds
upon scientists’ understanding of the neural circuitry of the nematode worm Caenorhabditis
elegans, frequently used as a model
in biological research. While the detailed physical structure of C. elegans scant 302 neurons is well documented, the new
research helps measure how neurons in this organism affect each others’
activity, and could ultimately help researchers map out in detail how neural
impulses flow throughout the organism.

“This approach gives us a
powerful new tool for analyzing small neural circuits, and directly measuring
how neurons talk to each other,” says Sharad Ramanathan, an assistant
professor of molecular and cellular biology(MCB) and of applied physics at Harvard.
“While we’ve only mapped out the interplay of four neurons, it’s the first time
scientists have determined the ability of multiple neurons in a circuit to
excite or inhibit their neighbors.”

Zengcai Guo and Ramanathan combined genetically encoded
calcium sensors and light-activated ion channels with optics. The scientists used
a mirror array to excite individual neurons – each just two to three millionths
of a meter wide – while simultaneously measuring calcium activity in multiple
other neurons. This calcium activity serves to indicate whether these other
neurons were activated or inhibited by the neuron that was primed with a burst
of light.

“Using this technique, for the first time, we could
excite both a sensory neuron and an interneuron and monitor how activity propagates,”
says Guo, a research assistant in the FAS Center for Systems Biology, MCB, and School of Engineering and Applied Sciences. “We
expect that our technique can eventually be used more broadly to measure how
activity propagates through neural circuits.”

Manipulating neurons with light, Guo and Ramanathan
were able to evoke an avoidance response – causing the worm to back away from
light – that is normally prompted only when the organism is touched.

With a compact nervous system consisting of only 302
neurons linked by some 7,000 synapses, the nematode C. elegans is an
ideal system for studying the interplay between neural circuits and behavior.
While the physical connectivity of the neurons in this nematode is well known, scientists
know very little about which of these connections are excitatory and which are inhibitory.

Because of the small
sizes of the neurons and a tough cuticle surrounding the worm,
electrophysiological recordings can be made from only one neuron at a time, precluding
the possibility of any circuit-level analysis of neural activity. By establishing this
first fully genetically encoded light-based electrophysiology, the authors have
developed a way to overcome this limitation.

Guo and Ramanathan’s Nature Methods paper was co-authored by Anne C. Hart of
Massachusetts General Hospital and Harvard Medical School. Their work was
funded by the National Institute of General Medical Sciences.