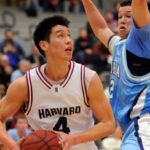 Goaltender Christina Kessler ’10 of the Harvard women’s hockey team was named ECAC Goaltender of the week on Monday (Dec. 8) after shutting out No. 2 Minnesota twice this past weekend. It is her second-consecutive honor this season and third overall.

Recording 24 saves against Minnesota in a winning effort on Dec. 4, 1-0, Kessler followed up her performance with 29 saves to guide Harvard to a 0-0 tie. Entering the weekend, Minnesota had not been shut out since the 2006-07 season.

With four shutouts this season and a 7-3-2 record, Kessler ranks third in the nation with a 1.25 goals-against average and owns a .950 save percentage. Named ECAC Goaltender of the year in 2008, Kessler is Harvard’s all-time leader with 25 career shutouts.