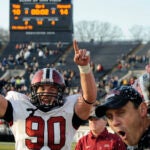 About 900 fellow classmates and I spent a good portion of our time at the Harvard Kennedy School (HKS) fully engrossed with last fall’s presidential election.

Walking to class, sitting in the HKS Forum, on a bench in the HKS Courtyard, over coffee, or over books, it was all we talked about.

Witnessing the most electrifying campaign of our generation with classmates who were certifiable political junkies, and all deeply committed to public service, was an almost transcendent experience. And it could only have happened at the Kennedy School.

I remember the debates, especially during the primaries. The passion of my classmates was matched by their abundant political knowledge, a breadth of experience working on and around the issues they discussed, and myriad connections to the political players involved.

Some were absent for weeks at a time, leaving to field organize for Republican John McCain or Democrat Barack Obama. It was not uncommon to read classmates’ writing about the campaign in a major publication or see them on the news discussing political strategy or the organizing work they were leading, all while maintaining their course loads.

What touched me the most was the uncommon civility present at all times in our political dialogue. No shouting. No name-calling. No anger that a handshake and a smile couldn’t resolve.

I was a Hillary Clinton supporter during the primary season, and one of only two black Clinton supporters at the School. This made me one of the more sought-after faux pundits at HKS. Classmates wanted to get inside of my head, and many wanted me to defend my stance. Some weeks, I’d spend hours debating the intersection of race, politics, and gender with members of the HKS community. But the discussion was never acrimonious. And I always learned to see things a bit differently afterward.

I started writing about politics during the election, creating a blog to keep a record of evolving opinions of the campaign. I took classes at HKS with Luciana Herman, an adjunct lecturer in public policy, and Timothy McCarthy, an adjunct lecturer in public policy, history and literature, that allowed me to spend time finding and developing my voice as a writer. Guidance from those courses ultimately helped me to get one of my commentaries published, with an assist from an Institute of Politics fellow. Without the resources the Kennedy School provided, that opportunity might not have been available.

I graduated in June with an M.P.P. I’m now a Kroc Fellow at National Public Radio, my job an outcome of my HKS policy-analysis exercise and an internship I had while a student. In my office, deadlines are hard, and the time to pontificate can be short, as with any news organization. Being where I am now makes me appreciate last year even more.

A chance to talk about politics and policy, in a safe space, with time to really think, and with friends who care, is something hard to come by in our current political climate. Knowing that makes me even more aware of the value my education at the Kennedy School. Witnessing history is amazing. Doing it with class is rare.