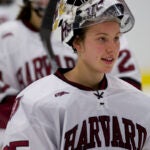 The Harvard football team may have fallen short of their goal of the 2009 Ivy League Championship, but the Crimson certainly dominated the postseason awards with four players named to the New England Football Writers’ Football Championship Subdivision (FCS) All-Star Team and 19 members of the team named All-Ivy League.

Both the two-time All-American Williams and Barker were also named to the All-Ivy first team, and were joined by offensive lineman Ben Sessions ’10, running back Gino Gordon ’11, and next year’s team captain, Collin Zych ’11.

Highlighting the awards was freshman running back Treavor Scales, who was named to the second team and honored as the Ivy League Rookie of the Year after recording 485 yards on 108 carries and five touchdowns in his first season at Harvard despite sharing carries with the Ivy League’s top rusher, Gordon. Scales finished the season sixth in the league in rushing yards and third in rushing touchdowns.

For a complete list of Harvard’s All-Ivy selections, visit GoCrimson.com.