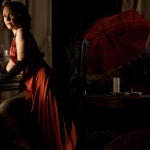 Playing a worm in a hill of dirt as a 3-year-old, Julie Peters fell in love with theater. Peters, the inaugural Byron and Anita Wien Professor of Drama and of English and Comparative Literature, still speaks about the stage with the charisma and wide-eyed ebullience of a kid.

Remembering a Shakespeare festival in her native Portland, Ore., Peters recalls how, as a youngster, she not only treasured the performances, but the replications of Elizabethan theater and its sweeping period accoutrements: “I loved the chess pies, the madrigals, the dancing on the green.…”

Even now, that sense of time and place drives Peters in her teaching and scholarship at Harvard. In love with the theatrical texts, yes — of notables such as William Shakespeare — but enthralled also by the period’s backdrop and its implications, Peters considers herself a cultural historian, an artistic anthropologist.

“I grew out of my love for acting fairly quickly,” she said. “I was too restless. Literature was very much in my skin, part of who I was. I always wanted to talk about the text and the history behind it.”

Peters also had a longstanding interest in legal history and culture. To deepen her interdisciplinary work, she attended Columbia Law School years after receiving an A.B. from Yale University and a Ph.D. from Princeton University. She even took the New York State Bar exam.

According to Peters, law and theater share an intrinsic kinship. “Law is, of course, one of the great old performance forms through which culture expresses itself, power works itself out, conflict is negotiated,” she said. “In law, the way people choose to act out a text always has direct consequences. At the same time, while we all know that law is a performance medium, it derives its legitimacy partly from disavowing its theatricality. So it’s also a place where you can see how powerful the ambivalence about theatricality has been in culture: the seduction by theater, and the suspicion of theater.”

Taking a class with Peters involves hitting the books, but also diving into a veritable artistic aquarium. “I always do performances in my classes,” she said. “Students learn things through their bodies as well as through textual and scholarly analysis.”

This semester, she staged two mock trials inside her law and drama course, titled “Crime and Law: Drama, Film, and Performance.” One of these, a student-devised exercise in how guilt or innocence is determined, sparked “a very profound discussion on decisionmaking,” which she plans to write up with the students for a collection of essays on pedagogic experiments. In another course, the students staged a performance of a Hans Sachs carnival play, “The Calf-Hatching,” with a student director, dramaturg, designer, and costumer, which turned out so well that she hopes to perform it for a wider audience.

These are just a few of the ways that Peters is infecting Harvard with her magically hands-on approaches and vivid plans for the future. Since arriving at Harvard in September, she already chairs the Committee on Dramatics (which runs the Dramatic Arts Program), collaborating with a coterie of likely suspects — Diane Paulus of the American Repertory Theater, for example — and unlikely suspects: David A. Edwards, the Gordon McKay Professor of the Practice of Biomedical Engineering and founder of Le Laboratoire, a Paris-based space where artists and scientists conduct collaborative experiments.

Peters is engrossed in the ways that drama, theater, opera, dance, film, digital culture, and other multimedia or multisensory performance forms exist in a continuum. She believes they should all be vehicles not only of knowledge but of collective experiment. She is striving for a new legion of courses at Harvard that “transcend traditional designations like acting and directing, and help us to rethink the disciplines of theater and performance.”

“Harvard has always, I think, been more open than other places to people who are involved in creative activity in conjunction with more traditional scholarly pursuits —sometimes the quirkier and more unusual the better. Its renewed commitment to the arts means that it’s a very exciting place to be right now,” she said, “and I’m eager to see what will develop here.”

For Byron and Anita Wien, whose names adorn the new professorship, their gift reflects an abiding love of theater and a longstanding desire to establish a named professorship of drama, which is the first in Harvard’s history.

“While I concentrated in science as an undergraduate, I enjoyed Harvard’s vibrant theater scene,” said Byron R. Wien ’54, M.B.A. ’56. “The theater has been very important to me throughout my life, and Anita and I believe that this professorship will greatly expand Harvard’s scholarship in the dramatic arts.”

Peters, who said she had numerous college majors while at Yale because she wanted to do everything, was awarded a Guggenheim Fellowship in 2007 for a book on obscenity and theatrical modernism. Peters has more books in the works, including one on theater, anthropology, ethnographic spectacle, and global performance culture between the 18th and early 20th centuries, and a collection of essays on law and performance.

She is whirlwind busy. Yet Peters said, smiling broadly, “I’m having a great time.”