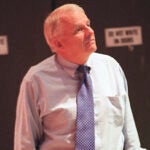 Dowling awarded the Glenn A. Fry Medal in Physiological Optics

One of eight American Academy of Arts and Sciences’ Visiting Scholars

Angus Burgin, who received A.B, M.A., and Ph.D. degrees from Harvard, is among eight individuals who have been awarded fellowships as part of the American Academy of Arts and Sciences’ Visiting Scholars Program for 2009-10. The program supports scholars and practitioners in the early stages of their careers — both postdoctoral fellows and untenured junior faculty — who show potential of becoming leaders in the humanities, policy studies, and social sciences.

During his yearlong residency in Cambridge at the academy, Burgin will work on a project titled “The Return of Laissez-Faire,” a trans-Atlantic history of free-market ideas and the institutions that supported them. He will focus on the economists in the decades following the onset of the Great Depression who helped to create a theoretical framework for the revival of conservatism in American politics.

Academy fellowships are intended to combine the scholars’ individual research with participation in the many ongoing programs and activities at the academy, including the opportunity to interact with Academy Fellows, who bring an unparalleled wealth of knowledge from diverse scholarly and professional backgrounds.