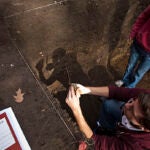 A center for art, expression, and delving into other cultures

A lush world of creativity, one that has been part of University life for four decades, lies just past Harvard Stadium, nestled amid a cluster of University utility buildings, in the kind of industrial-scaled space where art studios thrive.

The Harvard Ceramics Program has become a creative resource for students, faculty, staff, community members, residents, visiting scholars, and artists — in short, everyone with an interest in creating with, and deepening their understanding of, clay.

Harvard undergraduate Jim Rippe ’69 founded the original ceramics program in the basement of a Radcliffe dorm in 1969. Within two years, the studio program moved to a large space in a Radcliffe College building at 245 Concord Ave. where new kilns were built and course offerings expanded. In 1973, the Ceramics Program became part of the newly established Office for the Arts at Harvard and Radcliffe. It was folded into the Faculty of Arts and Sciences when Harvard and Radcliffe merged in 1999.

For more than 20 years, the program has been located on Western Avenue in Allston. The single-story, 10,000-square-foot space could double as a Hollywood prop house. Piled on floor-to-ceiling shelves are works that resemble prehistoric creatures and undersea corals. Sculptures of the human form are in one corner of the sprawling space. Around another corner, glossy botanical designs cover an entire wall. Carefully crafted pots and delicate tiles ripe with color are part of the eclectic mix, as are several kilns that burn white-hot.

Longtime director Nancy Selvage is the driving force behind the program and its integrated curriculum that taps into art and scholarship across the University and around the world.

Selvage became involved with the program in the 1970s when she was an artist hunting for studio space. She offered to teach in exchange for space to work in, eventually taking on an expanded teaching role and becoming director in 1978. From the beginning, Selvage recognized the rich potential for connecting the making of ceramics with a study of museum collections and art history. “I realized that there was a real need for specialized seminars on specific ceramics cultures and that Harvard had fabulous resources to support this,” she said.

Over the years her programming has explored ceramics traditions from places like Japan, Ghana, and the American Southwest, and included interdisciplinary workshops on such topics as Athenian vase painting, the pottery of western Kenya, and Spanish colonial ceramics. Working in tandem with Harvard museums, faculty, visiting scholars, and artists, the program combines academics and aesthetics.

“Ceramics is at the crossroads of so many fields,” said Cathleen McCormick, director of programs at the Office for the Arts. “Harvard’s comprehensive ceramics program has really developed into an international study center, one that harnesses the educational power of art making, as well as the academic study of art and artifacts.

“I think of it as an art studio, but also as a research lab.”

During her tenure, Selvage has worked to strengthen the undergraduate community’s connection to ceramics. She has helped to create shorter programs and workshops for students unable to add another full course to their packed schedules, and several years ago she introduced Clay All Night, a studio party for Harvard students with a free shuttle service from campus to studio that runs until 1 a.m. Expecting about 30 participants, Selvage and her staff were overwhelmed at their first event when more than 400 students showed up.

Most recently, Selvage, Harvard faculty members, and Ceramics Program instructors helped to create a set of workshops for the College’s new General Education curriculum and its anthropology 1010 course. In keeping with the course’s focus on empirical reasoning, the interactive program provided students with experiences for considering everything from clay’s chemical composition to the diverse historic techniques used to create various vessels.

“Ceramics is an empirical science and an art form developed from experience and observation, evolving in response to cultural values, social needs, and raw materials,” said Selvage. “With this studio experience we wanted to focus on some of the questions that archaeologists ask or should learn to ask as they analyze artifacts.”

One recent afternoon, 30 Harvard College students got their hands into clay at nine stations, practicing techniques passed down over thousands of years. At one table, they learned the art of shaping smooth bowls from a lump of clay using a round stone and a wooden paddle. At another, they examined some pots, searching for clues about how they were made. At the next station, they marked flat slabs of clay with a simple porcelain stamp, replicating the ancient method used in Mesopotamian societies to convey important information on clay tablets.

For sophomore and Mather House resident Danielle Parga, the hands-on, interactive learning was a plus.

“I definitely saw a real connection to archaeology,” said the history of art and architecture concentrator, who chatted with an instructor from Peru in Spanish as he paddled a lump of clay into bowl form.

Selvage was also the force behind the recent creation of a wood-burning kiln for the ceramics program. Developed through a partnership with Noble and Greenough School in Dedham, Mass., where it is housed, the pioneering smokeless kiln is efficiently fired with local wood, and the work is glazed with ash from the sustainable fuel.

For many participants, the encompassing nature of the program is a large part of its appeal. So too is the diversity of its participants. Students rub elbows with professors and community residents (who are also welcome), and beginners work alongside and learn from ceramics masters. In addition, the program, which has 12 teachers and a regular stable of visiting artists, supports community service workshops conducted by Harvard students and collaborative projects with local students and residents of the Allston and Brighton neighborhoods.

“One of the most unusual aspects of the program is that it engages a very broad community,” said Jack Megan, director of the Office for the Arts at Harvard, who likened the studio to a type of “sacred space where people can go to focus their mind and eye in an intense practice involving such considerations as form, texture, and surface, as well as technology.”

Selvage plans to retire at the end of this month to devote more time to her own art career, which focuses on large-scale art installations and public art projects in clay and metal. Looking back, she said that the ability to change and grow the Harvard program has proven deeply satisfying.

“The best part has been interacting with so many varied and interesting people and being part of an institution that has so many educational resources,” said Selvage. “It’s been thrilling to have had such an amazing set of colleagues and students, to learn from and grow with for so many years.”