A tale of two continents 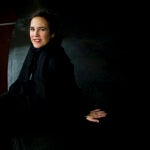 When Elisa New first picked up her great-grandfather Jacob Levy’s entrancing and ornate carved cane, she immediately sensed the unfolding journey on which she would embark.

New, an English professor at Harvard, had long been curious about her Jewish family’s origins in coming to America. But it was Levy’s cane — with its mysterious initials, names of foreign towns, and provocative question-mark shape — that compelled New to travel as far as Lithuania and as close as Baltimore in her home state of Maryland to research the past and narrate her discoveries in her book “Jacob’s Cane” (2009).

Over the course of a decade, New said, she made “multiple trips … to London, the Baltics, and to other places that became part of the book’s story, from World War II battlefields in Belgium and France to the tobacco fields of North Carolina, and to Israel.”

Among her familial revelations was that Levy hailed not from Austria, but from Lithuania, coming to Baltimore in 1884 as a businessman selling preshrunk fabric for clothing; and that her great-great-uncle Bernhard Baron was a cigarette magnate at the turn of the 20th century. A richly woven saga of American and Jewish histories, “Jacob’s Cane” also traverses the storied past of big tobacco, the Industrial Revolution, and New’s relatives killed in the Holocaust.

New was awed by her many discoveries, which, she said, “connected my own individual family to currents of history in a way I hadn’t imagined possible.”

“The international tobacco trade; the American struggles for the dignity of working people that gave us socialism and the labor movement, which inspired some to invent labor-saving devices and others to run for public office; the European Enlightenment with its manifold implications for ordinary persons in Europe; the terrible wars of the 20th century; America’s rituals of democracy: these large ideas and movements were all reflected in the lives of my own individual family,” said New.

Though claiming she was “never very good at telling stories,” the newfound author is thrilled to pass these tales along, to her own family and beyond.

“Learning to tell a historical story in a way that readers could appreciate is in some way what I’m proudest of,” said New. “Researching this book made clear to me that my family — that all families — belong to history and that history is all around us.”