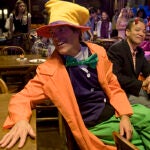 The Harvard women’s soccer team clinched a share of its second consecutive Ivy League Championship on Oct. 31, and with it an automatic bid to the NCAA tournament. But after punching a ticket to the postseason, the Crimson (9-6-1; 6-1 Ivy League) took care of some unfinished business on Nov. 7, claiming the title outright with a 2-1 overtime triumph at Columbia.

September now looks like an aberration that’s only visible in Harvard’s rear-view mirror. The team that month won just once in its first seven games and finished September at 3-5-1.

Responding as champions are expected to do, however, the Crimson won six of their final seven games, and the program’s ninth Ancient Eight title.

The hero against Columbia was Melanie Baskind ’12, the 2008 Ivy League Player of the Year, who scored both of the Crimson’s goals, including the game winner at the 95:08 mark of overtime.

Baskind, who finished the regular season second on the team in scoring (4) and first in assists (6), was named to the Top Drawer Soccer National Team of the Week and received Ivy Player of the Week honors on Nov. 9.

Nov. 13 (4 p.m.) the Crimson will travel to Chestnut Hill, Mass. to face Boston College in the First Round of the NCAA Tournament. Earlier this season Harvard fell to the Eagles, 4-1.