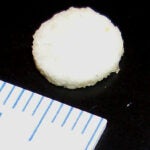 What, exactly, distinguishes humans from apes?

“The line leading to the genus Homo split maybe 7 million years ago from other apes, and this helps explain why 99 percent of the DNA overlaps,” said Hrdy, professor emerita of anthropology at the University of California, Davis. “Humans and other apes are very similar.”

And that last 1 percent isn’t all about intelligence, Hrdy said, dispelling the idea that humans are universally smarter than apes.

“We share a lot of cognitive similarities,” she said. “That explains why a chimpanzee can test better than most graduate students at remembering series of numbers on a computer screen.”

Hrdy, who received her A.B. in 1969 and Ph.D. in 1975 for work in Harvard’s Department of Anthropology, returned to speak on “Mothers and Others: The Origin of Emotionally Modern Humans.” An audience of more than 300 listened to her discuss the fundamental differences between modern humans and apes.

Rather than simple cognitive ability, Hrdy said, our emotional maturity sets us apart perhaps more than any other trait. While apes do cooperate, she said they lack something fundamentally human: empathy.

“Understanding what someone else might be thinking or just being interested in attributing a mental state to someone else is something humans do naturally, right from an early age,” she said.

Hrdy went on to explain the vital role of empathy in distinguishing modern humans from their primate ancestors, saying our aptitude for imagining the emotions of other individuals is a powerful indicator of our humanity. Our ability to cooperate stems directly from that ability to empathize.

“Humans are more eager to share. Sharing impulses lead to a more sophisticated transfer of information,” she said. “Cooperation behaviors like sharing are a reaction to competition from other groups.”

Cooperation and the capacity for empathy evolved from the special context of shared care of infants, she said. So the nursery was the cradle of our humanity.

Hrdy’s talk was co-sponsored by the Harvard Museum of Natural History, the Department of Human Evolutionary Biology, and Harvard University Press.