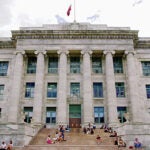 Around the Schools: Harvard Medical School

Robert D. “Bob” Utiger, M.D., a beloved physician, researcher, mentor, educator, and editor died on June 29, 2008 at his home in Weston, Massachusetts. Bob was born on July 14, 1931 in Bridgeport, Connecticut, but, when he was young, the family moved to St. Louis where he grew up and attended a local private school for the first two years of his high school education. He subsequently transferred for his last two years to Phillips Exeter Academy and later entered Williams College. There he was a scholar-athlete, playing four years of varsity lacrosse and graduating Phi Beta Kappa. It was during a summer vacation after his junior year that Bob took a trip to Europe on a refurbished Liberty ship and among the passengers was a young woman attending Middlebury College named Sally Baldwin. A casual relationship was established which flourished during the next year, with a number of trips between Middlebury and Williamstown. Bob then entered medical school at Washington University in St. Louis and he and Sally were married in 1953 in Newtonville, Massachusetts. Their three children, Jane Lyon Utiger, David Frey Utiger, and Nancy Baldwin Murphy were all born and grew up in St. Louis.

Bob was an outstanding medical student. Graduating Alpha Omega Alpha, he received his house staff training and became a Chief Resident in Medicine at Barnes Hospital in St. Louis. He served a fellowship with William Daughaday, a world-class researcher on growth hormone, and from 1961 to 1963, worked at the Endocrinology Branch, National Cancer Institute, with Drs. William D. Odell and Peter G. Condliffe on immunologic studies of purified human and bovine thyrotropin (TSH). This work led to Bob’s single-authored landmark publication “Radioimmunoassay of Human Plasma Thyrotropin,” published in the Journal of Clinical Investigation in 1965. The TSH assay is still one of the most commonly ordered tests in all of medicine because of its utility in identifying patients who have thyroid dysfunction. This was the first of many papers dealing with the hypothalamic-pituitary regulation of the thyroid gland, a topic Bob returned to repeatedly during his career. His first academic position was in the Department of Medicine at Washington University School of Medicine, where he was selected a Markle Scholar, a highly prestigious award given to select faculty at US and Canadian medical schools.

In 1969, he was recruited to the University of Pennsylvania by Dr. Arnold Relman, eventually becoming a Professor of Medicine and the Chief of Endocrinology. During his time at Penn, Bob developed one of the first radioimmunoassays for the active thyroid hormone, triiodothyronine (T3), and used it in a remarkably productive period of clinical research with his fellows, who included Drs. Peter Snyder and Charles Emerson, both of whom have become prominent endocrinologists, in their own right. These studies dealt with the physiology and pathophysiology of the thyroid hormone feedback regulation of TSH using thyrotropin-releasing hormone as a tool in both humans and animals. Later, he turned to the study of thyroxine (T4) to T3 conversion, working with Michael Kaplan, David Gardner, Tony Jennings, and Mansour Saberi, investigating the biochemistry of Type 1 deiodinase, the effect of fasting and illness on the pituitary-thyroid axis and on the inhibition of T4 to T3 conversion in response to that stress. One of these papers, published in The New England Journal of Medicine in 1979, is still cited as the definitive demonstration that the endogenous reduction of T4 to T3 conversion in fasting humans ameliorates the negative protein balance of that condition. As Chief of the Endocrinology section at Penn, Bob was a respected and important member of the faculty, where he excelled as a teacher and clinical consultant.

In 1979, Bob moved to the University of North Carolina to be a Professor of Medicine and the Director of General Clinical Research Center (GCRC). As GCRC Director, he was literally the embodiment of the Center. He immersed himself in the research programs of all the lead investigators who used the facility. To the members of the GCRC Committee, it always seemed that he knew more, or at least as much, about every study as did the Principal Investigator. With his typical generosity, he devoted countless hours to reviewing protocols, solving technical problems, and facilitating everyone’s work. He was extremely helpful to Fellows and junior faculty in designing clinical research projects and helped young faculty members establish careers in clinical investigation. It was not unusual for him to devote extensive time and effort to heavily edit someone else’s R01 grant and he comprehensively read and edited almost every grant that was submitted by the physicians who used the Center. He also continued his own work on thyroid physiology, which had a very strong human investigation focus.

Bob was also a superb physician-teacher as well as physician-scientist and was greatly admired by the students, house staff, and clinical Fellows, as well as faculty colleagues. All of these groups sought his opinion on difficult clinical cases as well as challenging research projects. When he announced that he was leaving to come to Boston, the Associate Chief of the Medical Service was distraught because he did not know “to whom he could go to for endocrine consultations.” During his time at the University of North Carolina, he also served as Editor-in-Chief of The Journal of Clinical Endocrinology and Metabolism (JCEM), the premier journal in its field. He also began his collaboration with Dr. Lewis Braverman as co-editor of The Thyroid: A Fundamental and Clinical Text, the classic in its field, an effort which spanned 18 years and four editions.

In 1990, Bob returned to Boston as Deputy Editor of The New England Journal of Medicine and Clinical Professor of Medicine at Harvard Medical School. At the Journal, he served first under Dr. Arnold Relman (with whom he had worked at the University of Pennsylvania) and later with Dr. Jerome Kassirer focusing on endocrine studies. It is in these two editorial capacities, with the JCEM and the NEJM, that many of the world’s endocrinologists were exposed to the depth of Bob’s knowledge and his high standards for succinct communication. The final hurdle for publication in these journals was responding to an all too often sentence-by-sentence, unbiased but vigorous critique of what was often thought by the authors to be the “final” version of the paper. Typically, the manuscript pages were virtually covered by a sea of red ink. While disconcerting, Bob’s comments invariably educated the authors in the art of scientific communication and often included substantive contributions to the research, even to topics in which the authors were the acknowledged world authorities. During the ten years that he served as a Deputy Editor of the New England Journal of Medicine, he played an important role in its success. His good judgment, intelligence, and his unfailing instinct for ethical behavior in research and medical journalism were of inestimable assistance to the Editors, who came to rely very heavily on his advice.

With his retirement from The New England Journal in 2000, Bob became a full-time member of the Brigham and Women’s Hospital’s (BWH) Thyroid Division, which later was merged into the Division of Endocrinology, Diabetes and Hypertension. He assumed a new responsibility, editing Clinical Thyroidology, a quarterly review journal of the recent thyroid-related literature sponsored by the American Thyroid Association, and focused the rest of his efforts on teaching, mentoring and patient care. He also was an important member of the BWH Institutional Review Board. In his leadership role on the Institute of Medicine-sponsored Committee on the Health and Environmental Effects of Perchlorate, he summarized their deliberations in both written and oral testimony for Congress. It was in this period also that we at the Brigham were treated first-hand to his skills as a teacher, a consummate clinician, as well as his truly encyclopedic knowledge of endocrinology. As far as we could tell, he had never forgotten any article he had read, and it seemed he had read virtually everything. During our weekly clinical Grand Rounds, he would typically support his comments with the most relevant literature, mention the lead author, journal, and year of publication, and summarize and critique the conclusions. As one might imagine, he was in great demand by the fellows as a clinical attending and gave of his time unstintingly to them as well as to students, residents, attendings, and, of course, to his patients.

Bob received numerous honors, including the Van Meter Prize and the Distinguished Service Award of The American Thyroid Association, as well as the Sidney H. Ingbar Distinguished Service Award of The Endocrine Society. In recognition of his outstanding contributions to teaching and clinical care, the Endocrinology Division at the Brigham has named our main conference room in his honor. It was in this room that he shared so much of his knowledge and superb clinical judgment with all of us.

This summary of Bob’s many accomplishments unfortunately cannot capture his wry sense of humor and his everyday thoughtfulness for his colleagues, his students and his patients. He was the epitome of the Academic Physician, a scholar, physician, teacher, and friend and a role model for each of us to emulate. We have attempted in this short space to do justice to this uniquely generous individual. We hope we have succeeded.