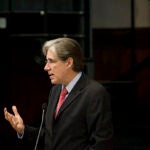 Colonies of army ants, whose long columns and marauding
habits are the stuff of natural-history legend, are usually antagonistic to
each other, attacking soldiers from rival colonies in border disputes that keep
the colonies separate. But new work by a researcher at the Harvard Museum of
Comparative Zoology and colleagues at the University of Copenhagen shows that
in some cases the colonies can be cooperative instead of combative.

In those cases, when an army ant colony loses its queen, its
workers are absorbed, not killed, by neighboring colonies, and within days are
treated as part of the family.

The research, conducted in an ant-rich area on the slopes of
Mount Kenya, is detailed in the journal Proceedings of the Royal Society B – the Society’s journal of the biological sciences.

Army ant colonies are dominated by a single, large queen who
produces the eggs that give rise to all of the colony’s individuals, which can
number millions of workers. When she dies, colonies quickly disappear, raising
the question of what happens to the many individuals.

The work was conducted by Daniel Kronauer, a junior fellow
in Harvard’s Society of Fellows, over two field seasons in Kenya. Kronauer and
his colleagues followed the fates of 10 army ant colonies whose queens they had
removed. The researchers lost track of two of the colonies but observed two
distinct strategies used by the remaining eight.

Most of the queenless colonies, seven out of 10, simply
joined a neighboring colony  —
determined by genetic analysis — with the new workers slowly losing their
distinct colony odor, and within days becoming fully integrated.

The last queenless colony stayed on its own, with workers
employing a strategy of producing a small brood of winged males. Though these
males were removed for analysis, in an undisturbed colony the males would fly
off looking for young unmated queens. Though this strategy does provide some
chance of passing along the colony’s genes, the small number of males produced
— just 31 in this case compared with 3,000 in a fully functioning colony —
illustrates that this strategy may not be efficient.

“It is a last option to get some fitness returns before they
die,” Kronauer said.

Though the work illuminates where most of the ants go, it
doesn’t entirely settle the question of why. Though it makes sense that the
accepting colony would want to increase its size and competitiveness by gaining
many new workers, the evolutionary drivers behind the queenless colony’s
workers absorbing into the new colony are more vague.

Since workers are normally kept from reproducing, Kronauer
and his co-authors found, there doesn’t seem to be a direct fitness benefit.
Instead, the authors suggested that the fusing colonies are driven by indirect
fitness benefits gained because of distant relationships between colonies, and
they called for more fieldwork to explore the issue further.