Morrison named Rookie of the Week 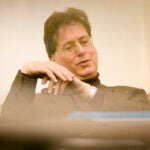 Levin to give Noble Lectures

For his four-goal performance in the Crimson men’s hockey team’s 6-5 overtime loss to Boston University (Nov. 24), Harvard forward Conor Morrison ’13 was named Rookie of the Week by the ECAC on Monday (Nov. 30).

His four-goal output — the most by a Crimson player since 1998 (Chris Bala ’01) — now gives him five tallies on the season and ties him with Alex Killorn ’12 for the team lead. Morrison also moves in to second place nationally among freshmen with 0.56 goals per game.