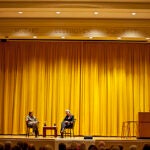 Will host Monmouth or UConn in NCAA second round

Needing one win to claim the Ancient Eight crown and an automatic NCAA playoff berth, freshman defender Richard Smith came up big for the Harvard men’s soccer team against Penn on Nov. 15, netting the game’s only goal in the 68th minute to put the Crimson up, 1-0.

From there, tight defensive play for Harvard was enough to hold off the Quakers, as the Crimson clinched their first Ivy League championship since 2006 (13th overall) and finished the regular season with the team’s best record in more than a decade.

Sophomore goalkeeper Austin Harms made two saves in posting his sixth shutout of the season. Smith’s game-winning tally was his first career goal, and earned him Ivy League Rookie of the Week honors.

The Crimson finished the regular season ranked 11th nationally with a record of 13-3-1 (5-1-1 Ivy League). Harvard, who has a first round bye in the NCAA tournament, will host the winner of Friday’s (Nov. 20) Monmouth or Connecticut match. Game time is set for Sunday (Nov. 22, 1 p.m.) at Ohiri Field.