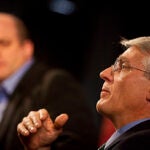 Harvard materials scientists have come up with what they
believe is a new way to model the formation of glasses, a type of amorphous
solid that includes common window glass.

Glasses form through the process of vitrification, in which
a glass-forming liquid cools and slowly becomes a solid whose molecules, though
they’ve stopped moving, are not permanently locked into a crystal structure.
Instead, they’re more like a liquid that has merely stopped flowing, though
they can continue to move over long stretches of time.

“A glass is permanent, but only over a certain time scale.
It’s a liquid that just stopped moving, stopped flowing,” said David Weitz,
Mallinckrodt Professor of Physics and Applied Physics in Harvard’s School of
Engineering and Applied Sciences (SEAS) and the Department of Physics. “A
crystal has a very unique structure, a very ordered structure that repeats
itself over and over. A glass never repeats itself. It wants to be a crystal
but something is preventing it from being a crystal.”

Other than window glass, made from silica or silicon dioxide,
Weitz said many sugars are glasses. Honey, for example, is not a glass at room
temperature, but as it cools down and solidifies, it becomes a glass.

Scientists such as Weitz use models to understand the
properties of glasses. Weitz and members of his research group, together with
colleagues at Columbia University and the University of North Texas, report in
this week’s Nature a new wrinkle on an old model that seems to improve how well
it mimics the behavior of glass.

The model is a colloidial fluid, a liquid with tiny
particles, or colloids, suspended evenly in it. Milk, for example, is a
familiar colloidial fluid. Scientists model solidifying glasses using colloids
by adding more particles to the fluid. This increases the particles’
concentration, making the fluid thicker, and making it flow more slowly. The
advantage of this approach to studying glasses directly is size, Weitz said.
The colloid particles are 1,000 times bigger than a molecule of a glass and can
be observed with a microscope

The problem with traditional colloids used in these models,
however, is that they often rapidly solidify past a certain point, unlike most
glasses, which continue to flow ever more slowly as they gradually solidify.
Weitz and colleagues created a colloid that behaves more like a glass in that
way by using soft, compressible particles in the colloid instead of hard ones.
This makes the particles squeeze together as more particles are added, making
them flow more slowly, but delaying the point at which it solidifies, giving it
a more glasslike behavior.

By varying the colloidal particles’ stiffness, researchers
can vary the colloidal behavior and improve the model’s faithfulness to various
glasses.